That's a one-size-fits-all headline for the last 12 hours or so, if there ever was one! Last night, Thor 2 director Patty Jenkins pulled out, citing "creative differences" while apparently maintaining a pretty good relationship with Marvel Studios. Deadline had the report first, and their comment that "[Jenkins] will probably end up working on one of these superhero films, but perhaps not on a sequel" led some fans (notably Bleeding Cool) to speculate that the filmmaker, who is more accustomed to smaller films where she has much more creative control, may have wanted to craft her own world (through casting, the visual look of the film, etc.) in a way she just couldn't, following on the heels of Kenneth Branagh's successful first film earlier this year. As everyone who reports on it points out, Marvel's scheduled fall 2013 release date for Thor 2 makes the search for a director a pretty urgent proposition. 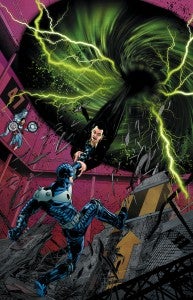 Meanwhile, Paul Jenkins (no relation) was announced this morning at DC Comics's The Source blog as guest-writing a two-issue arc in Stormwatch #7 and #8, beginning in March. Current writer Paul Cornell, who is handling many of the same concepts and even, according to reports, some of the same characters in Demon Knights, confirmed via Twitter that he'll be leaving after the series's sixth issue, so while Jenkins's stay on the book may be brief, it's unclear as yet who will take over when he's done. The fate of current series artist Miguel Sepulveda is still unknown; DC doesn't mention him in their initial release and Cornell's tweet only served to tell fans which books he personally would or would not be writing. According to rumors at Bleeding Cool, the role of the mysterious hooded woman who appeared in all of the New 52's first issues will be revealed in Stormwatch. We've guessed as much in this space before, too. If this is true, it's likely that DC editorial is working closely with--or possibly taking their time choosing--the incoming series writer. If editorial is guiding the book with a heavier-than-usual hand, it wouldn't be the first such report this week. Following the announcement yesterday that she was leaving The Fury of Firestorm: The Nuclear Men with its sixth issue, Gail Simone posted to her message boards that "These things happen. They always suck, but they happen. An editor's vision doesn't match what you thought the book was about, it happens." This seems to confirm earlier rumors that Simone had quit (possibly as earl as October) due to a falling out with editorial. Both Cornell and Simone remain on other DC books for the foreseeable future. Ron Marz's final issue of Voodoo will be released this month after a similar falling out, according to an interview the writer gave to Newsarama. While next month's Voodoo #5 was solicited with Marz as the credited writer, he said in the interview that his script for that issue will not be used. Unlike Simone and Cornell, Marz is not working on any other DC projects at present.