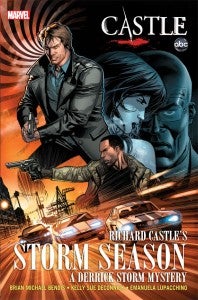 Marvel Comics has released a preview of Castle: Richard Castle's Storm Season, a forthcoming, hardcover graphic novel which will be available from the publisher in October.

Written by Brian Michael Bendis and Kelly Sue DeConnick and featuring art by Emanuela Lupacchino, the story picks up where the last Marvel graphic novel left off and guides the fan-favorite characters of TV's Castle through the four-color world of comics.

Check it out below; Castle's next season on TV will begin on September 24, so this comic should be the perfect thing to pick up and pore over during the baseball postseason or the holidays, when the new season is already starting to miss a week here or there.

Marvel is proud to present your first look at Castle: Richard Castle’s Storm Season, an all-new hardcover graphic novel inspired by the popular “Castle”television series, and based on the best-selling novel by Richard Castle! In this “adaptation” of Derrick Storm’s second novel, the private investigator is hired to find a missing a woman—but what should have been a routine mission quickly spirals out of control when Storm overhears the woman’s terrifying scream on the wire. Plagued by the victim’s helpless cry, Storm—despite an ominous warning—investigates.  Soon, he’ll discover an international conspiracy reaching further than he ever imagined—and perhaps the truth about Clara Strike, a CIA agent the world thinks is dead! The blockbuster writing duo of Brian Michael Bendis and Kelly Sue DeConnick reunite for their second Castle story along with red-hot artist Emanuela Lupacchino in Castle: Richard Castle’s Storm Season, on sale in comic shops, the Marvel Comics app, iBookstore, Nook Bookstore and everywhere books are sold on October 15th, 2012.