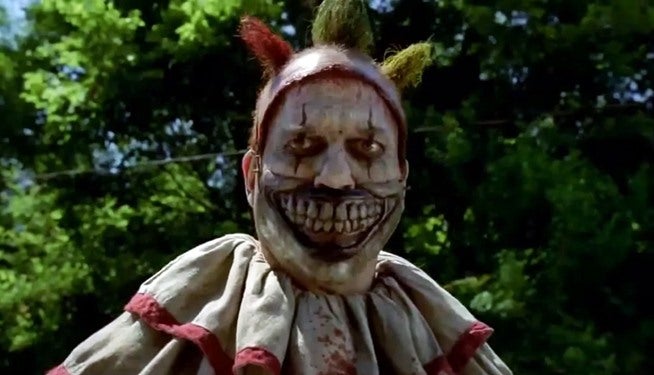 No one is laughing at the horrific clowns on American Horror Story: Freak Show, but one particular group is downright offended by them. Clowns of America International, came out last week to complain that the FX series' newest character, Twisty, is irreparably damaging the reputation of clowns everywhere. Twisty, for those not in the know, is a murderous clown who likes wiping the smiles off of people's faces with a pair of scissors. According to the group, evil clowns like Twisty only spread the coulrophobia epidemic crippling the nation's youth.

Yes, coulrophobia, or a fear of clowns, is a diagnosable illness.

"Hollywood makes money sensationalizing the norm. They can take any situation no matter how good or pure and turn it into a nightmare,'" Clowns of America International President Glenn Kohlberger, or as he's more famously known, "Clyde D. Scope," protested to The Hollywood Reporter. "Clowns to killers. I choose not to play into any of it."

Apparently, these guys have never heard of The Joker. Still, things aren't looking so good for the world's #1 source for nightmares. The Reporter said that membership for the contradictorily named Clowns of America International has dropped by 1,000 within the past year, as younger generations fail to fill the vacant red noses left behind by retiring clowns. Perhaps Kohlberger should change his stage name to Paglicacci.