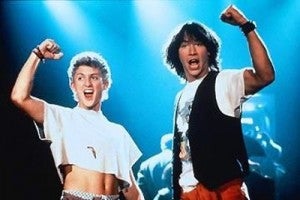 The long-awaited third installment of the Bill & Ted series from writers Ed Solomon and Chris Matheson took a major step forward today, as it was announced that Galaxy Quest and RED 2 director Dean Parisot intends to helm the film, according to Vulture.

It's been clear for a while now that both Keanu Reeves and his co-star Alex Winter, now mostly a director and producer, would return to reprise their titular roles as Bill and Ted in the most excellent sequel, along with William Sadler, who is rumored not only to be returning to the Bill and Ted-verse following his 1991 stint as the Grim Reaper, but also to be appearing in Iron Man 3.

With Parisot now on board (presumably after he finishes filming on RED 2, which reportedly shoots this spring), Solomon and Matheson are teaming with the cash-strapped MGM (who owns the rights to the Bill and Ted franchise) to work on finding a co-finance deal like the ones MGM has developed for its Valley Girl remake and the upcoming James Bond sequel, Skyfall. Vulture reports that insiders are telling them they're looking to a more recent time-travel comedy--Hot Tub Time Machine, whcih drew all the inevitable comparisons to Bill & Ted's Excellent Adventure and Back to the Future when it came out--for a business plan, describing their aim as "a mid-priced studio comedy."

The article further describes the project as a sequel that will catch the world up on the current whereabouts of Bill S. Preston, Esquire, and Ted "Theodore" Logan, and reflects that Solomon and Matheson wrote the threequel script "on spec" (that's for no money) because they wanted to show a finished draft to the studio to prove it could work. All of that is pretty old information for those who have kept up with the film's slow progress though.

At the height of its popularity, Bill and Ted starred in live action AND animated TV series, as well as comic books and video games. Since then, the cast of the film have mostly failed to reach those same lofty heights.

Rufus--a major character in the first two films played by the late stand-up comedy legend George Carlin--has already been confirmed by Solomon as having been removed from this story. Whether there will be a similar guiding hand (one commenter at Vulture suggests Louis C.K.) remains to be seen, but it's hard to imagine how the plot would move forward without one.

RED 2 Director To Take on Bill and Ted 3