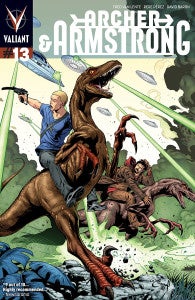 Archer & Armstrong depart the Faraway in the explosive finale to "Far Faraway," released today--or do they? The pair certainly have a couple of surprises in store for them before the end of the story, including the location of Flight 19, one of the most notorious Bermuda Triangle disappearances of all time, and a little insight into the backstory of General Redacted. As always, series writer Fred Van Lente joined us to discuss the issue and its implications for the future of the title. You can check out the interview below--but don't do so until after you've read the comic, since this interview is a look back at all the moving parts and so is loaded with spoilers! So go buy the comic and read along with us! 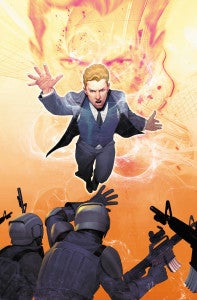 ComicBook.com: So, this is a pretty big Fred Van Lente week. I've been remiss in discussing Brain Boy with you. Anything you want to say about this or any of your non-Archer & Armstrong projects coming up for the Valiant fans who're tuning in for our regularly-scheduled conversation? Fred Van Lente: Well, Brain Boy is a revival of a 60s series from the same folks who brought you Turok, Son of Stone, so hey, Valiant fans, check it out just for that -- It's an espionage thriller starring the world's greatest psychic (or so he thinks), an arrogant young man working for the United States Secret Service. But it turns out reading minds actually makes you more paranoid, as he learns in this backstabbing double-crossing mystery set around the United Nations General Assembly. You can check out a great preview over at USA Today. ComicBook.com: I love this issue's standard cover. It's the kind of image that I feel really stands out on the shelves. Have you thought about that at all--that considering it's Valiant and you don't have The Joker or somebody to fall back on, this arc has been really handy with the familiar iconography for casual readers? Van Lente: I just thought it was a hilarious image -- who doesn't want to read about guys on dinosaurs fighting UFOs?!? ComicBook.com: How far out did you outline the series when you pitched it? This certainly feels like a payoff of the teaser re: Ivar in the first issue. Van Lente: Originally this was supposed to be a limited series, so I only plotted out through the first arc. But thanks! Ivar was always supposed to come back as the Timewalker at some point, though at the starting gate I wasn't entirely sure how. 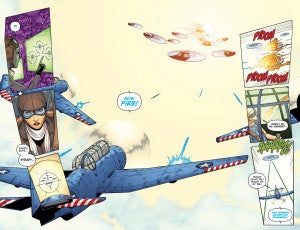 ComicBook.com: Can I just note that you've got a two-page spread in here that features five Avengers? Van Lente: I made a joke on Twitter I was happy to be writing Avengers again. I heard crickets. ComicBook.com: Have you got a particular historical figure in mind for Redacted? Giving him a specific role in a real-life sequence of events seems to flirt with that a bit. Van Lente: His whole pipe thing is reminiscent of Douglas MacArthur, but that's about it. Flight 19 was actually run by the Navy version of the National Guard, so I was tweaking history a bit there by including him. ComicBook.com: Also: Weren't two of the planes eventually recovered? Or am I thinking of another Bermuda Triangle mystery? Van Lente: Well that's what they thought they recovered... That's what They wanted us to think! 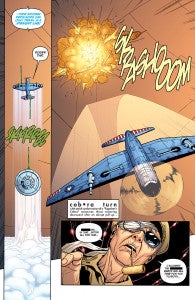 ComicBook.com: Did you intentionally give Bierce your dictionary device, or was that just a happy accident? Van Lente: Sure, his Devil's Dictionary is my favorite of his many works (https://www.goodreads.com/book/show/10410032-the-devil-s-dictionary-tales-and-memoirs) and all the dictionary bits are direct quotes from it. ComicBook.com: Is there an internal logic you've got as to how time and the body works in the Faraway? How did Amelia's broken legs heal while nobody ages? Van Lente: I never got around to explaining that the Seven Sages built/acquired a second Boon, that's why everyone in the Faraway doesn't age, because they're being kept alive via that. It's why everyone heals so well too. You kind of have to be totally dismembered (or in General Redacted's case, blown up -- in theory, he's really "comic book dead") to die. I didn't have the opportunity to explain the mechanics, hopefully nobody minds. ComicBook.com: That's a heck of a reaction we get out of Archer, but I guess he's left them in as good a position as is humanly possible; he knows that when he's ready, he can go get them, is that about it? Van Lente: No, I think he's super-pissed and doesn't want to see any of them again. Archer, don't forget, is still basically a teenager and not entirely in command of his emotions yet. ComicBook.com: "Sect Civil War" is coming up; how will that work with the guys separated? Van Lente: Seems like a bit of drawback, doesn't it? We'll just have to wait and see...