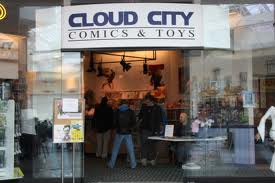 , ComicBook.com had checked in with a number of small comics retailers in Upstate New York to discuss the impact of DC Entertainment's New 52 announcement, and the decision to simultaneously release digital and hard copies of the publisher's entire superhero line.

The end of the year seemed like an opportunity to look back on DC's New 52 initiative, we talked to Jeff Watkins, the owner of Syracuse's Cloud City Comics & Toys. Watkins had some very harsh words for DC and other members of the retailer community who were supporting digital day-and-date back when the idea was first announced, and even in September when the books started rolling into shops. After he'd had some time to adjust to the changes, though, he was a little more measured in his criticism.

“I don't think [comics retailers] should be moving toward digital,” Watkins said in a phone interview in November. “I think we should resist that, but I'm not as upset by the DC initiative as I once was.” He explained that while he had expected day-and-date to take a bite out of his foot traffic, the excitement over DC's bestselling event had the opposite effect.

“I'm seeing very few people moving toward digital,” the retailer explained. “People reading comics, want comics. I've previously and publicly chastised DC but with hindsight being 20/20 I've got nothing but applause for what DC is doing.” He also suggested that since the September launch of the New 52, he's seen an influx of new customers into his brick-and-mortar store, which is in a small mall just outside the city of Syracuse, and that most of the new readers don't read comics digitally with any more frequency than his longtime customers do.

Retailer Reverses on New 52, But Not Digital