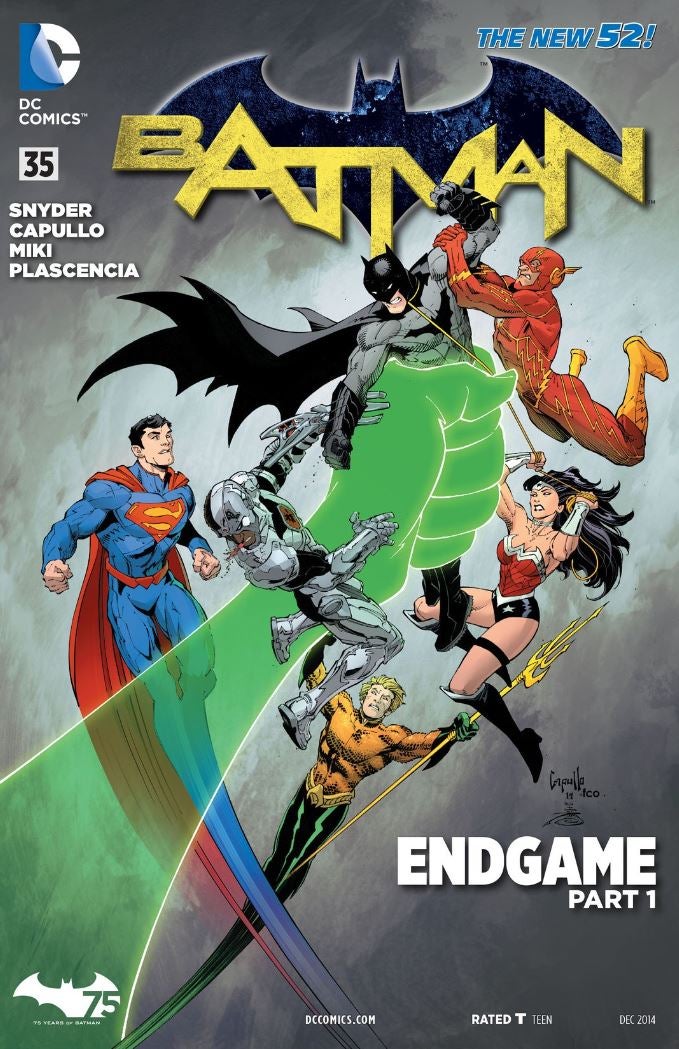 Scott Snyder and Greg Capullo are the golden boys of DC Comics in the eyes of their readership. They've not only managed to create one of the consistently best selling comics at shops around the country, but have set a high bar for quality within the superhero genre and left an indelible mark on one of the most iconic characters of all time: Batman. Their combined critical and commercial success has not waned over the course of three years and Batman #35, the beginning of "End Game", makes it clear that it won't for a long time to come.

Most of Batman #35 centers around a battle between Batman and members of the Justice League. The origins of this conflict are just as much a mystery to Batman as they are to the reader. Snyder eschews any early exposition and instead allows Capullo to exhilarate readers with an action sequence worthy of the concept: Batman vs. The Justice League!

Capullo, with Danny Miki's inks and FCO Plascencia's colors, creates versions of DC icons that look every bit as good as their incarnation of the Dark Knight. They appear bigger than life and filled with power, but are still connected to the dirt of Gotham by Capullo's line-heavy work. Each of Batman's "solutions" is executed with visual flair. The sequence in which The Flash appears is perfect, capably addressing both the problem and solution in a series of panels that capture the essence of time in this scenario.

The character of Batman in "End Game" is the destination of the character in "Zero Year". In "Zero Year" he is shown learning what it means to be Batman and then striving to reach that ideal. In "End Game" he has obtained the ideal. This is Batman at his absolute best. He is prepared for everything, knowing his city and his battles better than anyone else. This depiction of Batman indicates that the conflict to come in "End Game" is one that can only be addressed by the best possible version of the character, an exciting thought.

Once the battle hits, the issue flows smoothly, but there is a bit of awkward exposition fit into the first few pages. Snyder works to position "End Game" within the continuity of the DC universe. The story is set after the events of the currently ongoing weekly event comic Batman Eternal and makes use of characters and plot points that have been established in that series. There is a new woman who is aware of Batman's secret identity. She appears to be a relation of Alfred's, but her role is never clearly established and she is ultimately an extraneous element in this comic. There is also an odd dream sequence based around Batman's fears that may relate to outside events, but here it reads like a non sequitur. The opening of this issue may read more clearly for readers of Batman Eternal, but for those focused only on Batman it is confusing and unnecessary. Either way, the work to establish this story within continuity detracts from the power and fun of the overall experience.

Although there is a lot to like about the first 21 pages of this comic, they are essentially foreplay for the final reveal. It's one that I am going to avoid discussing openly for now because it is the type of twist that actually manages to heighten the experience of reading the comic. That final panel twists the dynamic of what is happening in a sudden and terrifying manner. It reveals the widespread conflict of this issue to have been nothing more than a prologue for what is yet to come. And it all happens in an instant. Capullo makes it clear what is happening, so that readers can sit in awe, not having to parse through dialogue to figure out what has happened. My advice is to read Batman #35 immediately, if you have not already. This is a final page that is actually deserving of spoiler warnings.

There has been some uproar about the cover price of Batman #35 at $4.99. Luckily, that issue has been avoided moving forward thanks to Snyder and Capullo who requested that DC Comics reduce the price of future issues to $3.99; a request to which DC Comics has agreed. I'll defend spending $4.99 on this issue though because the quality of the backup story is every bit as good as what Snyder and Capullo have created.

The backups for "End Game" are being written to relate directly to the main story. This backup plays upon that final reveal and provides exposition that would have caused some serious pacing issues within Snyder and Capullo's story. Although this backup is connected, it strikes a drastically different tone from what comes before it.

This backup, entitled "The Pale Man", bears much more resemblance to a horror story than a superhero story. It seeks to terrify and often questions its own veracity. James Tynion IV and Kelley Jones are a perfect collaboration to strike the mood. Jones' art creates a world dominated by shadows. Even when set in a well lit living room, darkness crawls over the faces and actions of its inhabitants. The forms of those inhabitants are all exaggerated or slightly deformed. There is nothing obviously wrong with them, but Jones' compositions pull out the truth. Focusing on specific body parts or engaging with their forms from awkward angles creates the sense that there is something not right with these people. Jones evokes a mood of brokenness throughout the entire tale, as if the people talking have all been irreparably damaged in some manner that rests just beneath their skin. What is wrong is not immediately visible, but its effects are ever present.

Assuming Tynion and Jones are continuing to craft the backups for "End Game", then the bonus material should get readers every bit as excited as the main attraction. It's a ghoulish sideshow affair to compliment the circus' top tent.

Batman #35 is a great package. From the first page of the feature to the last page of the backup it manages to be consistently engaging and is always well told. There's no doubt that Batman would sell well no matter what creative talent was attached, but I'm skeptical that it would garner this high of sales and this much acclaim without creators like Capullo, Snyder, Miki, Plascencia, Tynion, and Jones. Month after month, they bring their absolute best to these pages, making Batman one of the best superhero comics on the stands.

REVIEW: Batman #35 - "One of the Best Superhero Comics on the Stands"