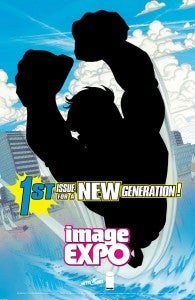 and Invincible creator Robert Kirkman announced today at Image Expo that Invincible #111, artist Ryan Ottley's hundredth issue on the title, will be designed as a jumping-on point for new readers. The issue "is like three number 1's in one," Kirkman joked at the Expo today. This follows a week of teasers hinting at "#1  in a new publishing era" for Kirkman's superhero series, his longest-running title. The "scale and the scope of the of this story will far outpace" anything that's been seen before in Invincible, Kirkman claimed, and will change the course of the book. "I think people will be surprised with the direction that we're going in," Kirkman said. He told the audience that Ottley says it's almost like a new writer taking over the book, "The Walking Dead Robert Kirkman," since there will be a lot of "horror and misery" coming "This has always been planned," Kirkman said, "but it's fun to get to this stuff."

The Man Who Fell to Earth EP Teases Season 2 Plans