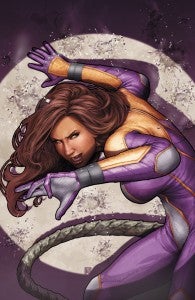 All day long, DC has been rolling out solicitations for February's sixth issues of their New 52 relaunch titles on The Source. With the Superman, Green Lantern, Young Justice and The Dark families of books already announced there hasn't been anything substantial in the way of major news to announce (although an image featuring Darkseid's redesign by Justice League artist Jim Lee--presumably the same one they showed off at the Justice League panel at New York Comic Con--kicked off the day). Apparently, though, there's at least one solicitation of interest still forthcoming: Ron Marz, creator of Shinku and writer of Magdalena for Top Cow, will be replaced by Uncharted writer Joshua Williamson on Voodoo with its sixth issue.

The company confirmed the news to Newsarama earlier in the day but did not explain the decision, saying only that the current art team of Sami Basri and Jessica Kholinne will remain on the title after Marz's departure. While the sixth issue will be solicited with Williamson as the writer, it's worth wondering what will happen with Voodoo #5, as Marz told Newsarama that he's been informed his script (solicited last month) will not be used for the issue.

Bleeding Cool adds interesting context to that conversation by today confirming today that inventory issues are being created for New 52 books in case something urgent comes up and a creator leaves, is fired or cannot make their deadline. The rumors have been floating around for quite some time, but George Pérez told his Facebook followers that he was working on one, serving as the first official confirmation that they're being produced. Will Voodoo bridge the gap between writers using an already-produced inventory issue? Or is it more likely that, foreseeing the problem, they produced a fill-in that's tailored to this situation?

Whatever the case, the solicitation text for #6 suggests that the fifth issue will play a major role in the direction of the seies going forward, so it will be interesting to see what choice DC makes.

It's difficult to imagine that could be the case, as Marz himself told Newsarama that he didn't expect the move. "The only thing I was told was that they wanted a different direction for the book," the writer told Newsarama, and suggested that the editor he had been working with (Brian Cunningham and Darren Shan worked on #1) was leaving the title at the same time as Marz so there was little hope of hearing anything more than that.

Ron Marz Off VOODOO With #5