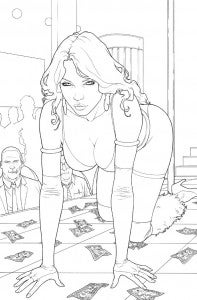 The release of both Catwoman #1 and Red Hood and the Outlaws #1 on Wednesday, coupled with an article posted at Comics Alliance attacking them, has pushed the issue of gender roles and the way women are depicted in comics to the forefront once again.

After taking a beating over the course of the last few months for what's perceived as underrepresentation of female characters and creators in their New 52 initiative, DC Comics was poised to have a week where they didn't have to worry: Wonder Woman and Birds of Prey, both books that are pretty typically good to their female leads, had new #1 issues on Wednesday, and with only 12 issues shipping there were seven (Catwoman, Red Hood and the Outlaws, Wonder Woman, Birds of Prey, Green Lantern Corps, Legion of Super-Heroes and Supergirl) that featured a female either in the lead role or as one of the main supporting characters on the cover. When the books came out, though, and the critics started to really warm up their singing voices, it didn't take very long for that ratio to fall by the wayside and the old "everyone in comics is a closet misogynist" conversation to come back up.

Ron Marz, meanwhile, is a guy who is no stranger to such controversies. Gail Simone's famous Women In Refrigerators website refers to events that took place during Marz's run as the writer of Green Lantern in the mid-1990s. More recently, he's spent a lot of time writing strong female leads, from Magdalena and Witchblade at Top Cow to his creator-owned series Shinku at Image. And when DC announced the creative lineups for The New 52, Marz's name was once again attached to a female character in Voodoo, a former WildStorm character and WildC.A.T.S. member.

Of course, part of Voodoo's history is that, when she was initially recruited for the team, she was working as an exotic dancer. And with the New 52 basically wiping out the history of most of the WildStorm characters, it appears as though she'll be back at that job, at least at first, when her new #1 hits next Wednesday. Oh, and the first story page readers saw was the one above, where she's at a strip club on all fours.

In a nutshell, the character was bound to come up in these conversations, and being released on September 28 (the final week of the New 52 launch) means that the only information out there so far is hearsay, conjecture and--a close cousin to both--the Internet.

"It's part and parcel of what goes on anytime you do a large initiative that gets a lot of press," Marz said of the negative attention this issue is drawing. He said that he hasn't read the two issues in question, and so didn't want to comment on them directly, but that the nature of serialized storytelling in a tight-knit community like comics adds fuel to these fires.

"I think specifically in comics, moreso than any other media that I'm familiar with, people get really bent out of shape if a book isn't exactly what they want it to be," he said in an interview with my Panel Discussions podcast last night, explaining that if an album comes out from a musician you don't like, it's easy just not to buy it--but that the idea of characters with long histories and a shared universe means that content people find objectionable is sometimes hard to resist as a reader. "I don't rail about, 'Well, why didn't Justin Bieber do an album that I want?'...I just don't worry about it."

He says that in comics, because the audience has a very tight relationship with the characters, "Why isn't that book what I want it to be?" is a recurring theme. (Some readers may recall that Marz has some experience with this issue.) On the one hand, he says, it's great to see that kind of passion in the readership but on the other hand, it's frustrating when fans get so vocal about issues before an issue ever hits the stands. "Certainly Voodoo has gotten dragged into this discussion on the depiction of women even though the book's not out yet." He also hinted that Voodoo is something of an espionage book and there may be a reason why she's doing that particular job in that particular place at that time which will become clear only to people who judge the book on its merits instead of on a single, unlettered page of promo art.

"I think it's very easy to sit back and throw rocks because every time this stuff comes up, it's not really a dialogue," Marz says of the larger issue of gender in comics. "It's a series of monologues where the parties involved say what they want to say, arrange their evidence in whatever way best supports their argument and ignore everything else."

But that doesn't mean that he rejects the idea that there's progress to be made--just that passionate fans need to take the long view in evaluating complex issues.