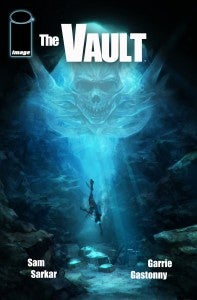 It's always interesting where life will take you and the paths that one ends up on. For actor and writer Sam Sarkar, that is certainly the case. As an actor on the long-running syndicated series Neon Rider, Sarkar also appeared in several films, such as Legends of the Fall and The Brave, with Johnny Depp and Marlon Brando. The move into writing occurred between Neon Rider and his films, with his work on the Aaron Spelling hit series Beverly Hills 90210 and then his own projects under Spelling himself. Today, he is Senior Vice-President of Depp's production company, Infinitum Nihil, headed by Christi Dembrowski. Between a busy schedule of writing, producing and more, he found time to fill me in on a new project, The Vault, a limited series for Image Comics.

The story of The Vault centers on a team of treasure hunters after a mysterious and dangerous treasure pit located in the Graveyard of the Atlantic, but nothing can prepare them for what they are about to unleash as they explore. The inspiration for the story came from Sarkar's backyard, almost literally! " The main inspiration came from the story of the Oak Island Treasure Pit. I grew up not far from it in Nova Scotia and used to visit it a lot when I was a kid. I was not the only one whose imagination was captured by it. There were many theories about what was down in the bottom of a pit that was so elaborately protected and went down so far underground," Sarkar said.

Inspiration for Sarkar didn't just come from real life. He has always had a fondness for the stories Alien, 2001: A Space Odyssey, the escape artist Houdini, and The Book of Revelation from The Bible, and the first issue of The Vault certainly touches on many of these elements of the mysterious and the dangerous. With that sense of mystery come several scenes of the treasure hunting team, led by characters Dr. Michael Page and Dr. Gabrielle Parker, exploring the vast deep. For these scenes of the series, as well as some of the work's deeper themes, Sarkar saw something in Werner Herzog's film Cave of Forgotten Dreams that spoke to him. "It is an amazing viewing experience. He shot in 3D inside the Chauvet Cave in France where the oldest examples of cave and rock art have been found. The images in the cave date back 32,000 years to the beginnings of homo sapien civilization in Europe. It is a fascinating time that coincides with the dying out of Neanderthals. The art and artifacts in that cave challenge us about our own identity. You can see from how simple yet advanced the imagery is that our minds are very much the same. The selection of animals represented are limited. There are no images of men and only one partial image of a woman in the entire cave. Why did they leave so much out? What was going through their minds? The discovery inside The Vault is equally challenging. I’ve been thinking about it more and in some ways, it kind of boils down to a simple question that I think haunts all of us, “Why are we here?” In other words, “Does the Universe need us or not?”

While the story focuses on the discovery in The Vault and the secrets that not only the two lead characters are keeping from each other but the other aspects of the team as well, the setting of the story is key as well, with those caves and deep sea discoveries a part of the narrative. Sarkar was quick to credit artist Garrie Gastonny with bringing the vision to life, "Garrie’s artwork is amazing. His stuff on The Vault runs from the fantastic to the romantic to the terrifying. The images are very powerful. We go back and forth with a lot of visual references. But once I give him some ideas (from photos of landscapes to sculptures and paintings), Garrie goes off and does his own research. We really worked from a lot of things in the real world and put them into the world of The Vault." Gastonny also has some impressive work behind him, with Warren Ellis' Supergod among his work.

Besides The Vault, which arrives in comic book shops on July 27th, Sarkar sees himself continuing the sometimes tricky balance of work and an enjoyable family and personal life. "Being a good dad, I see that in my future. My kids are super talented and I want to help them tell their own stories. I also am working on a project with a friend of mine, Simon Barry that I can only reveal as this: Clogmasters. This will be a landmark piece of work. Imagine if Ingmar Bergman made a kung fu movie. I hope to put it out through Image." For a man with a background in film, television, acting and writing, such a combination is one to look forward to!