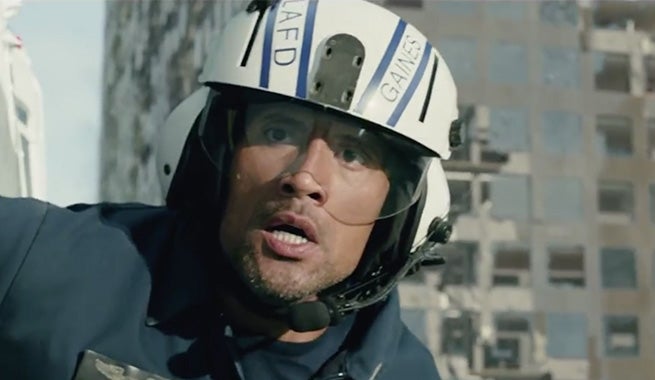 San Andreas is rattling theaters worldwide. It's a movie packed with action and destruction but among all of the chaos are heroic moments sprinkled throughout the film. San Andreas star, Dwayne "The Rock" Johnson has repeatedly emphasized the point that San Andreas is really about the heroes. He credits the real rescue pilots for their heroic efforts in the real world.

In honor of the heroes Johnson has been referring to, we decided to take a look at the five most heroic moments in San Andreas and not all of them come from Johnson's rescue pilot Ray Gaines! Regular people can be heroes, too! Be warned, SPOILERS follow if you have not yet seen San Andreas.

To start the film the audience was hurled into the action. Clocking in with over 600 documented saves, Ray Gaines was ready to pencil in one more after a young girl drove off of a California cliff. This was no easy rescue, though. Ray and his team tried to get as close to the dangling car as possible but couldn't quite squeeze between the cliffs...Until Ray said, "We're gonna have to tip the hat!"

The news team on board buckled up as Ray's heroics were put on display and he swiftly maneuvered the helicopter down into the depths of this fault. It didn't end there, though. After Joby got pinned underneath the car which was bound to fall from the cliff and any second, Ray repelled himself down, ripped the car's door off and saved the young girl seconds before she would have met her demise.

Dr. Kim Park wasn't around long enough for us to really get to know him, but he went out a hero. After narrowly escaping a spot in the dam where he discovered the earthquake to come, he chose to grab a little girl who was too scared to run rather than make it to safety himself. Just as the dam started to completely collapse, he tripped, hurling the little girl forward into Lawrence's arms but impaling his foot on a steel rod cemented into the ground. Rather than beg for help and put more people in danger, he instructed Lawrence to get to safety and sacrificed himself for the others.

Not every heroic moment has to be action packed. Lawrence probably saved more lives than anyone else on the day of "the big one." He managed to use Cal Tech's technology to hack into a news station's feed and warn the many people of San Francisco about the dangers ahead. While we obviously know a huge amount of people didn't make it out, Lawrence's warning provided many others with ample opportunity to escape and hold onto their lives.

Blake may have been the leader and hero of her group for most of the film but it did not start that way. Trapped in a limo in a San Francisco parking garage, Blake thought she would meet her doom after her mom's boyfriend, Daniel, cowardly left her behind. Luckily for Blake, her new friend Ben heard Daniel saying that there was a girl trapped in the parking garage. After Daniel scurried away, Ben and little bro Ollie raced to free Blake.

When they found her, it was no easy feat getting her free from the limo. With her legs stuck under the seat in front of her, Ben and Ollie had to find away to lift the giant cement pillar crushing that seat before Blake was crushed under the collapsing roof of her car. This heroic effort may be the craftiest of them all. Refusing to be defeated, Ben grabbed the limo's jack and used it to raise the cement block almost high enough to free Blake. When that wasn't enough, he wisely slashed the tires of the car to lower it while keeping the block raised up, ultimately freeing Blake.

Get To The Side Of The Stadium!

Ray never took the easy way. After skydiving into AT&T Park in San Francisco with his wife strapped to his chest, the two continued their search for Blake. Just after they walked outside the stadiums gates another enormous tremor shook the bay area causing more buildings to collapse. Ray knew he would be safe at the sturdy side of the baseball stadium but rather than run to safety, he gathered as many civilians he could, even carrying an injured young woman, to bring everyone to safety. He was always ready to make sacrifices in order to save others.

Which part of San Andreas do you think was the most heroic? Would you be able to spring into action the way rescue pilot Ray Gaines does should you ever be thrown into a situation as seen in San Andreas? Share your thoughts in the comment section!

Pokemon Unite: How to Add Friends