Earlier today, a Buzzfeed story went viral on Facebook and Twitter; it crossed my feed two or three times before I finally decided to click on it, out of sheer, morbid curiosity. The story, titled "A Man Has Been Having A Hilariously Close Relationship With Applebee's Facebook Page For Months Now," examines the meaning behind the Sex Criminals #1 variant cover at left, which identifies the creative team as "From The Writer of 'Hawkeye' and The Guy Who Talks To Applebee's On Facebook." And he does. Back in June, Zdarsky decided to "befriend" his local Applebee's restaurant, and spends more time talking to the restaurant's social media manager than you probably spend talking to your parents. It's pretty fun to witness. Based on his own blog, though, it looks like he's finished with the relationship. He and the Applebee's have mutually agreed that they're pretty neat, and said goodbye: 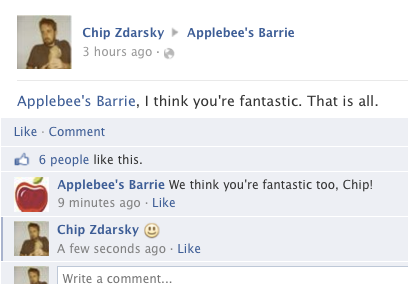