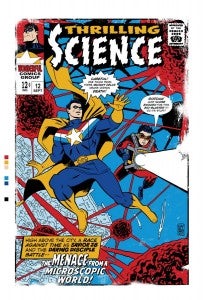 Shirts for a Cure

, a non-profit organization that works with musicians to sell exclusive t-shirts with the proceeds going to breast cancer research, will not only have a booth at New York Comic Con, but will feature a convention-exclusive t-shirt drawn by comic book artist and musician Mike Cavallaro. According to their website, "The Syrentha J. Savio Endowment (SSE) was established by punk-rock photographer Mark Beemer in 2002. SSE provides financial assistance to underprivileged women who cannot afford expensive breast cancer medicine and therapy. The Shirts For A Cure Project (SFAC) was launched by SSE to give voice to the social concerns of punk bands and their many fans as well as to raise awareness about breast cancer prevention." Cavallaro, who has been playing with punk band Sticks and Stones since the '90s, has drawn up a tongue-in-cheek t-shirt design featuring Savior 28, a creator-owned character he developed with writer J.M. DeMatteis for the IDW miniseries The Life and Times of Savior 28, which Newsarama called one of the finest superhero stories of the decade. (Okay, so that was me, while writing for Newsarama. Still, the book is phenomenal.) "New York Comic Con is just around the corner, and I'll be partnering again with Shirts For A Cure to help raise funds and awareness for women fighting breast cancer," Cavallaro posted to his personal Facebook page. "This exclusive T-shirt design, featuring a retro Savior 28 comic book cover, will be on sale at the SFAC booth, all proceeds go towards the charity." The image itself, if you look carefully, appears to show Savior 28 and his sidekick the Daring Disciple shrunk down to microscopic size and using superhero weapons to actually fight cancer on a cellular level, with of course the trade dress of a fictional Silver Age comic book company. Much of the appeal of Savior 28 was playing with the conventions of superhero comics, and so this kind of presentation serves a couple of purposes; first of all, it jives with what made the comic so special and second...well, it provides the folks who haven't ever read the comic, aren't familiar with it but see the shirt at the SFAC booth to connect with the content a bit. After all, Shirts for a Cure don't work with comics every day.