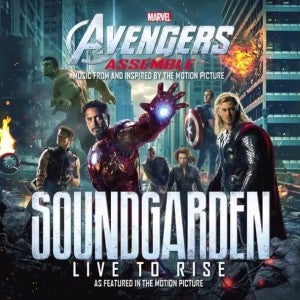 "Live To Rise," the first new song recorded in fifteen years by '90s alternative rock icons Soundgarden, went on sale yesterday through iTunes and other digital music outlets. The song will be featured on the Avengers soundtrack, available May 1.

Also featuring music by Rise Against, Papa Roach and Shinedown, the album--called Avengers Assemble--is actually "music from and inspired by the motion picture," which is to say that there's no guarantee the Soundgarden song (or any other specific track) will actually appear in the movie when it hits theaters May 4.

"When the opportunity arose to write an original song for 'Marvel's The Avengers' film came our way, we thought it could be a cool match," the band told MTV Splash Page when the track's inclusion was announced last month. "We are excited to release our new song 'Live To Rise,' which is also the only new song in the film."

The band broke up in the late '90s but have been back together since 2010. A number of "new" singles and a live album have been released since then, but none of the material was newly-recorded; even the previously-unreleased material was simply unused tracks from the band's heyday. It's widely rumored that they're planning to record a new album, although any serious movement on that front is likely to be delayed until at least after the Hyde Park Calling festival, where they will headline in July.

You can hear a brief tease of the song, released on March 27, in the video below or buy the single now on iTunes or Amazon.