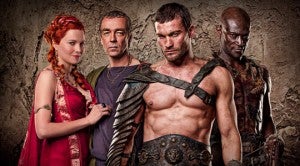 Spartacus: War of the Damned

, the upcoming third season of Starz's Spartacus TV series, will be its last, according to a report at IGN.

Despite being a fan-favorite, the series has faces an uphill climb, with ratings problems and the death of a showrunner along the way. The choice to rename each subsequent series has also made the series somewhat harder to keep track of, as DVRs will not "remember" it from season to season.

All that said, the series will have the opportunity to wrap up its plot before it goes off-air. In the interview, show creator Steven S. DeKnight said,

“Starz always does the unexpected. This show has been challenged, to say the least, in many, many ways. We’ve faced many difficulties and tragedies on the show. My original plan was to attack the show in a five- to seven-season arc. Once we got into it and after Andy [Whitfield]’s passing and looking at the historical story of Spartacus, we came to the decision to basically end on a high note.

“We certainly could have continued for a few more seasons and stretched it out, but we really wanted to end high and not feel like we were treading water – and really just condense the rest of the history into one amazing ten-episode, badass final season,” he continued. “You know, the whole show was a huge risk from the start for Starz, and it was another huge risk when I decided to try to keep the show going after Andy’s passing. Any normal studio would have just cancelled the show at that point and not risk the financial downside of it not working. But Starz, thankfully, really stuck by the show, and they really wanted it to be told all the way to the end. They didn’t want to cheat the viewers and just suddenly pull the plug. So they gave us this opportunity to wrap up the story, and we’re certainly taking that opportunity and running with it. This is by far the biggest season we’ve ever attempted.”

Spartacus: War of the Damned

will premiere in January 2013.