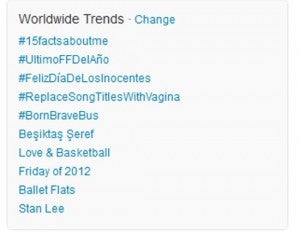 As thousands if not millions of fans and fellow celebrities turn to Twitter today to wish comic book icon Stan Lee a Happy Birthday, Stan Lee is now trending worldwide on the popular social media outlet. As previously reported by Comicbook.com, Stan Lee is celebrating his 90th birthday today.

Some started extending early birthday wishes to Stan Lee yesterday, including Amazing Spider-Man writer Dan Slott, who tweeted, “Wishing an early Happy Birthday to my #Generalissimo, "The Man", the Myth, the Amazing: @TheRealStanLee! The Greatest Comic Scribe of All!” The ever witty Stan Lee replied back, “@DanSlott what a gift, some guys give a nice cigar, a watch, but no not you, I get a dead #PeterParker Thanks for the bday wishes my friend!”

Star Trek’s William Shatner also extended an early birthday greeting to Stan Lee. Shatner tweeted, “@TheRealStanLee Excelsior! just doesn't seem to express the right sentiment tomorrow. Oh, how about HAPPY BIRTHDAY! Yes, that will do. MBB.” Stan Lee replied back, “@WilliamShatner who is a better friend than you? Thank you.”

Also, be sure to check out Comicbook.com’s list of ninety reasons to love Stan Lee.