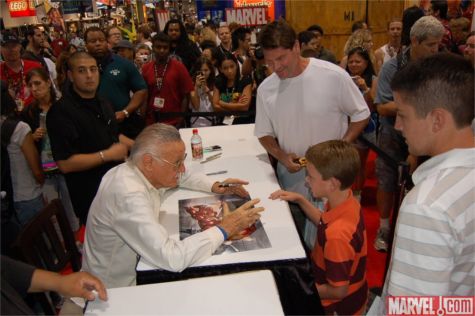 Stan "The Man" Lee will be appearing at the Marvel Booth at Comic Con International in San Diego. Lee is scheduled to make his appearance at the Marvel Booth (#2429) on Friday, July 24, 2009. According to a Marvel Comics press release, fans can come by the Marvel Booth starting at 9 AM on July 24, 2009 to receive a ticket. There is no purchase necessary for the tickets, which will enter fans into a random drawing to meet Stan Lee. Shortly after 9 AM, Marvel will pull tickets through a random drawing. Fans whose tickets are selected will receive a special pass to meet Stan Lee. They will be allowed to have one item signed during his appearance at the booth from 1:30PM to 2:00 PM, later that day. "There's no bigger rock star in comics than Stan Lee," said Tim Dillon, who is Manager of Business Development for Marvel Entertainment Inc. "We're proud to have him at The Marvel Booth and we hope to see you there! This is only one of the many surprises we've got planned all week long!" Photo: Marvel Comics