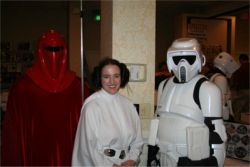 Several storm troopers and members of the Empire's royal guard were in North Carolina recently, but they weren't here to hunt down rebels or search for Luke Skywalker. They were here to promote the North and South Carolina chapter of the Fighting 501st Legion of Storm Troopers, named the Carolina Garrison. Before you determine that this group of Star Wars fans is just like all the others you've met, think again.

"We dress as the bad guys from the Star Wars films, and we actually have over 4,000 members of the 501st worldwide and about 120 in the Carolina Garrison," said member Cheralyn Lambeth. The group didn't begin a long, long time ago either, Lambeth informed me, with the group having its start in South Carolina in 1997, where it all began with just a handful of storm troopers. Visibility and wonder at the costumes led to interest, and the group grew from there.

As far as membership in this group goes, Lambeth elaborated a bit more on the requirements to join the Dark Side, "You have to be at least 18 years old, and we require that you create a movie quality costume of one of the Star Wars bad guys, using three reference sources such as a movie, comic book, or visual dictionary of the series." The costumes are examined for quality and accuracy, with some costumes requiring great attention to detail. "Storm troopers or biker scouts have their own requirements that are needed to fit the criterion we have for authenticity," Lambeth said.

The group may dress as villains in a lot of circumstances, but they love to talk about the volunteer work they do. "We do a lot of work with the Make A Wish Foundation," Lambeth said, "and a lot of people know us from that. We also do fundraising and visit local hospitals. We've also gotten a lot of recognition from Lucasfilm over the years for different aspects of our organization."

Despite these good intentions, Lambeth said the group sometimes finds itself having to deal with misconceptions about their organization and its members. "A lot of people look at our group and other fan groups and think, 'wow, these people really need to get a life,' but in fact our group contains doctors, lawyers, people in the film industry who have everyday lives outside of this. This is our hobby, this is our fun. We love using this venue and our hobby to help with our charity work."

It should come as no surprise that the group as a whole has grown as rapidly as it has. With Star Wars considered one of the most profitable and widely recognized film series ever made, it's no wonder that members tend to find the group rather than the group having to actively recruit. "People see us at comic book shows, at movie premiers and around towns and in places where we do charity events or work and I think they see it as an opportunity to become involved in some aspect of the Star Wars universe," Lambeth told me. With their stunning costumes and welcome, inviting manner, membership should continue to grow. In this case, it's not a terrible thing if the bad guys win, especially when they're so likeable!