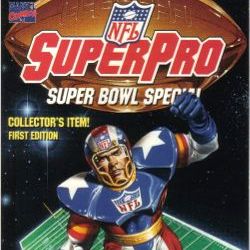 In order to celebrate Super Bowl 43, Comicbook.com decided to compile a list of all the great football comic books for comic book fans. Since reading comic books and watching football are American traditions, one would expect there to be a lot of great comic books about football. Unfortunately, there are surprisingly few football-themed comic books, and reading the ones that do exist is akin to watching a Super Bowl where the game is a blowout by the end of the first quarter. If only football comic books had multi-million dollar ads, then maybe they would be a bearable read. Most of the football comic books we encountered didn’t last for more than one issue. Of course, some were designed as one shot promotional issues. One of the earliest examples of a professional football comic book was Charlton Sport Library - Professional Football #1, which was published by Charlton Comics in 1969. Oddball Comics has a great write-up about the issue, which it describes as being more of a collection of schedules, player biographies, rosters, and game recaps than an actual comic book.

Way before Spider-Man started hanging out with Barack Obama, he spent some time with the Dallas Cowboys. In 1983, Marvel Comics published the one-shot called The Dallas Cowboys and Spider-Man. The story was entitled “Danger In Dallas” and was an advertising supplement for the Dallas Times Herald. Former Dallas Cowboys coach Tom Landry also got his own comic book. Spire Christian Comics published Tom Landry and the Dallas Cowboys. As far as football comics that weren’t one-shots or biographies, Marvel Comics deserves credit (or perhaps blame) for trying to launch two different football comic books in the modern area. In the eighties, Marvel’s first attempt at launching a football comic book was called Kickers, Inc. Kickers, Inc. was part of Marvel’s New Universe line, which should give you an instant clue about how successful this comic book was.

Kickers, Inc. told the story of a group of former professional football players from a fictional team called the New York Smashers. Instead of going into broadcasting or coaching, these former football players decided to become heroes for hire. Their leader was Jack Magniconte, who gained superhuman strength through a combination of an experimental muscle-enhancing device and exposure to radiation during the “White Event.” Kickers Inc. survived for twelve issues, which was about twelve issues too long. In the nineties, Marvel’s second attempt at launching a football comic book was called NFL Superpro. Marvel produced NFL Superpro in collaboration with the NFL, so one would think it surely would have met with more success than Kickers, Inc. But, no, NFL Superpro only lasted for twelve issues as well. NFL Superpro was not just a bad comic book, but it is widely regarded as one of the worst comic books of all time.

NFL Superpro told the story of Phil Grayfield, an ex-NFL football player turned superhero. A knee injury led to the end of Grayfield’s football career, but an incident involving fire, experimental chemicals, and a near-indestructible football uniform turned him into a superhero. As Superpro, Grayfield battled such diabolical villains as Quick Kick, a football place kicker turned ninja. His allies were the Happy Campers, whose members had such superpowers as being able to shoot pennies from their wrists. Go figure, why this comic book wasn’t an enormous success.