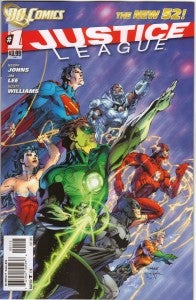 It probably isn't much of a surprise to anyone to find out that DC's top digital sellers are Justice League, Action Comics, Detective Comics, Batman and Superman. It may be something more of a shock--even if a small one--that when DC revealed their ten top-selling digital items since the August 31 relaunch to Comic Book Resources today, every one of the top ten was one of those titles--including all three issues of Justice League. This means that, at least on the digital front, Justice League #3 outsold almost every one of the New 52 #1 issues. You know, the 52 #1s which all sold out at the direct market level and which have gone back for as many as five printings in some cases. It means that even after three months, digital readers are buying Justice League in numbers high enough to outscore even the first issue of Animal Man, which was announced as going back for a fourth printing last week. That, of course, might be in part because so far, that title has been the only one DC has been publishing where readers can buy a copy at their local comic book retailer and get a digital copy for free. Starting in November, all of the other bestsellers in this list will also be made available in digital combo pack form, except for Superman. Whether that will lead to increased digital sales of Action Comics, Detective Comics and Batman remains to be seen. Someone with some remarkable math skills may be able to make educated guesses as to sales numbers, given a comment that John Rood, DC's Vice President-Sales, Marketing and Business Development, made in the CBR article. "There has been no shake up of numbers when you look at the percentage of physical sales by title. So if something is selling 6% of its physical sales digitally for issues #1 and 2, then it's about 6% in issues #3 and 4. And if another title has been selling at 16% of print sales in the early titles, the latter titles have stayed at the same level. So there's been no fluctuation. And the fact is that the makeup is largely the same and the performances you've seen in the data provided is largely the same in digital as it is in physical, yet we know from both anecdotal and primary research that this is a different audience. It suggests that the people might be different [for digital and print] but their tastes and their demos are largely the same." What are the best-selling titles in DC's digital library? Check 'em out below. 1. Justice League #1 2. Batman #1 3. Detective Comics #1 4. Action Comics #1 5. Justice League #2 6. Batman #2 7. Detective Comics #2 8. Justice League #3 9. Action Comics #2 10. Superman #1