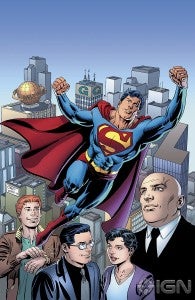 Whatever vision of Superman is the definitive one for you, the odds are good you'll get a look at him in a series of variant covers DC Comics is rolling out for next month's Superman Unchained #1, as the Man of Steel gets eight variant covers spanning the character's 75-year history. Featuring art by Bruce Timm, Dave Johnson, Neal Adams, Jose Luis Garcia-Lopez, Jerry Ordway, Dan Jurgens, Brett Booth and Lee Bermejo, the covers pay tribute to different iterations of Superman and his supporting cast from the '30s to the New 52. "It was one of those things we wanted to do, especially given this was Superman's 75th anniversary year," DC Co-Publisher Dan DiDio told IGN. "With a major launch like this, with the variant covers, we really wanted to capture Superman through the years and Jim Lee working with Mark Chiarello really captured that, the decades of Superman throughout time." The covers will ship in addition to the standard cover by Jim Lee, which will also be the cover of the "digital deluxe" edition that will carry all of the variants (as DC's digital editions generally do). "We really wanted to go after the artists that captured the flavor and the spirit of the times that we were going for -- everything from Superman's inception through the Golden Age, Silver Age, Bronze Age, Modern Age, through to capturing the time of Superman Reborn. Also, we're looking at Superman versus his greatest nemesis, Lex Luthor," DiDio said. "So we really wanted to capture the things that just resonated with the people throughout the years, because ultimately it just shows the life and longevity of this character. And the fact that we're able to launch this book, Superman Unchained, in the way we have just shows that he's just as vibrant and vital now as he was 75 years ago." [gallery ids="49191,49192,49193,49194,49195,49196,49197,49198,49199"]