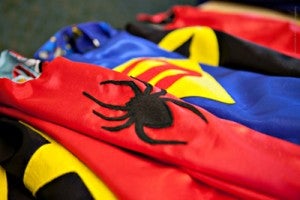 A Connecticut middle school student is collecting superhero capes for the children of Newtown in the wake of the attack on Sandy Hook Elementary School.

When 13-year-old Allison Anderson's family was discussing the shooting, Allison's brother said one of the brave little girls at Sandy Hook school "was like her own little superhero," Mollica said. "The lightbulb went off."

Originally, Anderson had been working with a program to collect capes for children suffering from cancer, but has decided to redirect her efforts toward organizing an event for the Sandy Hook survivors.

"We're at a point where there's a good possibility we'll be able to cover all of the elementary school students in Newtown … and at St. Rose of Lima school," Anderson's mother Camille Mollica told the Hartford Courant.

More than 1,000 capes have already been collected and that plans are being made for a superhero day sometime after the school's Christmas break.

Now through January 1, capes can be sent to Camie Mollica at 31 Cedar Street, Wethersfield, CT 06109.

Donations are also being accepted via PayPal to camie.mollica@gmail.com. More information is at Facebook’s CapesForKids page.