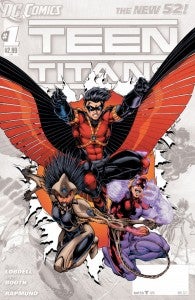 Twitter is down, but that hasn't stopped it from making news. Yesterday, before the popular social networking service stopped functioning earlier today, incoming Superman scribe Scott Lobdell, currently the writer on Teen Titans, took to Twitter to hint to fans that Bunker may not be the only homosexual member of DC's premier teen team for long--his boyfriend is likely not far behind.

"SPOILER ALERT: Bunker’s BF will NOT be ‘FRIDGED'!" tweeted Lobdell, according to a story at Bleeding Cool. " In fact, there’s a very good chance he’s going to join the team! I just get that vibe."

By "fridged," of course, Lobdell is referring to the "women in refrigerators" storytelling trope. It's widely accepted that in comic books, the significant others of the heroes are often subject to horrible events, often resulting in their death, as a storytelling device to motivate the hero. The term gained popularity after a fan (who later turned out to be writer Gail Simone) started a website dedicated to discussing it as a way of calling attention to the way female characters are often mistreated in comics. It was named after a 1990s Green Lantern issue in which Kyle Rayner's girlfriend, who appeared as a principal player in his first couple of issues, was murdered and stuffed into a refrigerator toward the end of his first arc in costume.

Many fans have accused James Robinson of engaging in the same kind of storytelling, after Alan Scott was revealed to be gay, only to see his boyfriend killed less than an issue later.

It was recently revealed at a New 52 panel at San Diego Comic-Con International that Bunker's boyfriend--who lives in Mexico and has been in a coma--will wake up soon to discover that Bunker has run off to the United States to become a superhero.

The Bleeding Cool story perceives Lobdell's comments to suggest that Vibe--once a member of the much-maligned "Justice League Detroit" and recently teased to return in DC Comics' Free Comic Book Day offering--may be a frontrunner for the role.