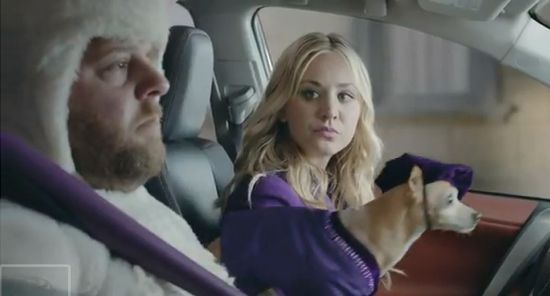 You know how movie studios started the trend of releasing teasers for their big blockbuster movie trailers. In essence, creating a small ad to advertise an even larger ad. Well, what's good for the movie studios is also good for the advertisers spending big bucks on Super Bowl commercials. Toyota has released a teaser for their 2013 Super Bowl ad which features Kaley Cuoco of The Big Bang Theory. Not the actual commercial mind you, but just a teaser for the actual commercial. Of course, since it features Kaley Cuoco, their ploy worked and we're sharing it with our readers. "When I saw the concept for the commercial, I knew it was something I wanted to do," said Kaley Cuoco. "I've had a great time filming and am excited to see the finished product." The Toyota 2013 Super Bowl Commercial will also feature a fan as well, since Toyota is running a "Get in the Big Game" promotion through social media. One lucky fan will get to have their picture appear in the Toyota spot.