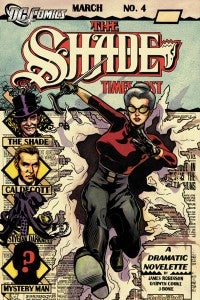 In spite of the fact that DC Comics has been promoting James Robinson's wonderful Starman Omnibus hardcovers as great holiday gifts, it seems unlikely that those stories "count" anymore in the new DC Universe of the New 52. Still, as one of DC's most popular series in recent years its appeal was enough for a spinoff, The Shade, to be greenlit as a 12-issue maxiseries starting in October. So far, The Shade has been entertaining and has hinted at events that occurred in Starman but rarely (if ever) relied on them to make sense. Next month's issue, though, is teased at the end of The Shade #3 as one of the popular Times Past stories that Robinson liked to do in Starman, this one set in 1944. And that brings some of the central questions of the miniseries to the forefront in a big way. Without the Justice Society of America, who never existed in the current DC Universe, how does Starman--a book which relied heavily on the JSA and the idea of "legacy" heroes in general--work? 1944 should be a time when The Shade was in combat with the original Starman and his allies, and whether the upcoming issue shows that or not will say a lot about the stories, Robinson and DC. If they do appear in the pages, though, what does that mean? Will fans assume it's an editorial cock-up or will The Shade suddenly have been shifted to an Earth-2 title? There is, of course, some evidence to support the latter. Other than the "blue Starman" and a brief appearance by Deathstroke, there hasn't been anything to suggest this comic is taking place in the same universe as the rest of the DC titles--and even the blue Starman hasn't appeared or been referenced in any other DC book. There's nothing to say that on DC's new Earth 2, Deathstroke won't appear and look largely the same as he does on Earth 1, particularly because he is--even in his own title--demonstrably older than the other characters who have been heroing and villaining for five or so years. Robinson, meanwhile, has been confirmed as the writer on a Justice Society revamp, set to join those characters with the new DC Universe in 2012 with artist Nicola Scott. All of that can be made sense of, then, but what of the frequent mentions in this month's issue of The Dreamtime and/or The Dreaming? Could it be that Robinson, in addition to sequelizing Starman, has been tasked with rolling elements of Neil Gaiman's Sandman into the new DC Universe? The Shade could be a stealth lynchpin of the DCU as a whole!

The Dreaming and "Times Past": Will THE SHADE Break the New DC Universe?