Praise the Force, the second Star Wars: The Force Awakens trailer has finally arrived. And just like the first trailers, this second preview of the Galaxy Far, Far, Away comes packed with plenty of moments to ogle over.

Below, we run through the trailer's top five moments. While every second was worth writing home about, these were the moments that truly connected with the Force.

The trailer opened with a beautiful shot of a decimated Destroyer space ship on the planet Jakku, giving evidence that The Emperor's evil empire truly is a relic of the past. The breath-taking image gave the trailer a necessary calm before the storm, where it proceeded to melt everyone's eyeballs off. 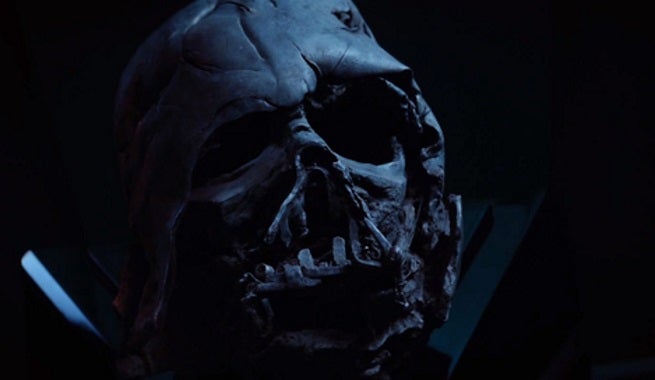 Speaking of past relics, the trailer shows someone, presumably Luke Skywalker, holding one of the most iconic treasures of Star Wars lore: Darth Vader's helmet. Though dusty and disfigured, the helmet still gives us chills. And, it serves as a reminder that the lord of the Sith may not carry a physical presence in this film, but his memory will more than hang over the entire cast.

As Luke Skywalker's voice narrates the trailer, we see a figure rest his mechanical hand rest of R2D2. Though we only see this person's cloaked backside, we can only assume that it's Luke. After all, how many guys in the Star Wars universe have a mechanical right hand and an R2 Droid? Hopefully this scene hints at plenty more action to come from the savior of the Force.

But don't think the Dark Side didn't have a say in this trailer. We had our first shot at the mysterious Sith, Kylo Renn, in action for the first time. Brandishing his already-trademarked cross lightsaber Renn stands before an army. It's about as intimidating of a shot as you'd imagine, guaranteeing that Renn will give more than a headache for the film's heroes.

Han Solo might not have shot first in this trailer, but he more than made up for it with the most stylish entrance. Walking off the Millennium Falcon with Chewbacca in tow, Han Declares that they're finally home. You're certainly right, Han.

What were your favorite moments in the second Star Wars trailer? Let us know in the comments below.

The Five Best Moments From The Force Awakens' Second Trailer