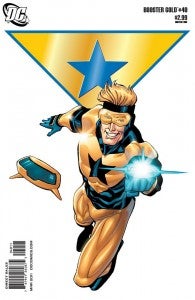 I see this column (and the similar work I've done with Savage Dragon, Young Liars, Echo and The Life and Times of Savior 28) as a kind of running commentary for the individual issues, not unlike what you get on a DVD. Occasionally, especially around big, landmark issues, the commentary might reach out into the deeper, more profound and important thematic elements of the series–but for the most part this is a visceral, immediate opportunity for me to ask the questions that occur to me about the issue and for the writers to clarify some points, tease some upcoming beats and elaborate on where an individual issue falls in the grand scheme of the title and the character's history. Honestly, the "director's commentary" nature of The Gold Exchange column doesn't always allow or demand a lot of answers from the subject or for me to be too very clever. I used to be a lot more in-depth and analytical when doing commentaries for the trades, but DC recently stopped providing me comp copies and so I now tend to pick them up whenever I pick them up, rendering those interviews rather moot. A source of real frustration, if there is one, when dealing with DeMatteis isn't what he won't or can't answer but what he doesn't know. Because his scripts happen over Keith's outlines, he's often only an issue or two ahead of us (if that). It makes for a strange and exciting writing process for him, but it also makes it harder for the pair of us to look at the long-term ramifications of the individual issues and to assess where any 21-page tale might play into the grander scheme. Additionally, the Giffen/DeMatteis team have a lot less affection for subtle references, in-jokes and continuity porn than the Johns/Katz/Jurgens/Rapmund gang did. It makes the commentary-track nature of these things come off a little flat at times, I think, because we're more used to Jurgens, who has a Grand Master Plan in place for Booster. Honestly I think the biggest issue at play is that DeMatteis doesn't have a ton to say about Booster that isn't there on the page…and there's nothing inherently wrong with that. 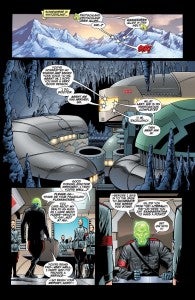 Certainly there is an element of showing a creator the respect he's due, too. I try to broach topics like a silly, campy villain in Hit Point in such a way that it doesn't alienate J.M., make him feel attacked or hurt. Because frankly you never can be certain when someone's writing is intentionally or unintentionally campy. And the recurring, monthly nature of this column means that the writers' feelings are something I have to consider. I can't just say whatever I want or ask whatever I want in the service of a single story. And while DeMatteis and I get along very well, I've been friends with Jurgens for ten years (I met him over the phone for the first time on the very first day of my internship at the late Wizard magazine in 1999). Every so often I'll say that something in the art reminds me of some old story from the '80s or something and instead of engaging, J.M. will ask, "Can we remove that? I don't want the artists to misinterpret it as a dig." That wouldn't ever happen with Jurgens because over the course of the time we've known each other I think I can safely say that he's learned the strange way that my brain works to some degree. Booster Gold has been a title where Ted Kord and the characters' history with the Justice League International has played a big role ever since the title started, but since Keith Giffen and J.M. DeMatteis took over, that relationship has been on full display, on the covers and pages of the book. This month's Booster Gold #40 is the first issue in quite some time that doesn't revel in the past—and it takes little time in sending Booster back to the future. What went into that decision? We talked to co-writer J.M. DeMatteis about the issue and what to look forward to for the rest of the story that started two weeks ago. Gold Exchange: So, first thing's first–what's the deal with the green noggin? J.M. DeMatteis: Ask the colorist! 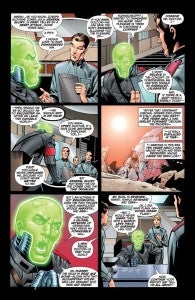 GX: Is the Switzerland of the DC Universe incredibly large? It seems unlikely that someone could spend decades building an army and an enormous base directly underneath the same small country that houses Checkmate and nobody noticed! JMD: In the DC Universe, Switzerland is the largest country in the world. Didn't you know that? GX: I really like the back-and-forth between Nishtikeit and 66–it kind of reminds me of the dynamic that Hero Squared had between Caliginous and Sloat, except that 66 won't be able to come back if the good Doctor follows through on his threats. JMD: When we finally do that Booster Gold-Hero Squared crossover, it'll be a witty banter bonanza. Actually, a Booster Gold-Hero Squared crossover is kind of a cool idea—! GX: Are some of the smaller discrepancies between this version of Booster's origin and the Jurgens version shown in the recently-released Booster Gold: The Tomorrow Memory trade (notably Skeets being inert when Booster finds him in yours, versus trying to stop Booster in Jurgens') an intentional tweaking/updating of the origin story or is that simply an example of something that Nishtikeit's people had to reconstruct and they just guessed wrong? JMD: We mention in the dialogue that some of the data was lost and that 66′s version of Booster's origin isn't precise…it's a reconstruction based on the information they were able to download. Which gets us off the hook with our discrepancies, doesn't it? See—we're nottotal idiots! 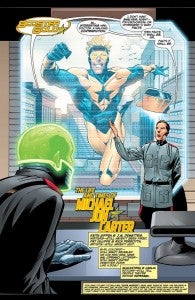 GX: Is this meant to be the opening chapter of the second Giffen/DeMatteisBooster Gold trade? It seems like a great entry point for new readers, even if they have no idea who the day-glo Nazi is. JMD: We were told this had to be a "jump on" issue: That's why we did the recap. Nothing to do with the next trade. GX: So given that he didn't get to read about the JLI, is it safe to say that Nishtikeit's going to have some comical misconceptions about Booster's stature in the hero community and his role with the League? JMD: Actually, it doesn't come up in the next issue. But we can save that for when he returns down the line. Or should I say if he returns down the line. GX: I know you've mentioned the idea of giving Booster a little more of a rogues' gallery, but Hit Point seems like another villain who's almost a gag. Is that intentional or is it just a matter of trying to balance the comedy and coming out with a villain who seems silly, but has the powers and all that of someone who could be an enduring threat? JMD: Hit Point isn't "almost" a gag. He is a gag. That said, we've got an incredible new villain coming up shortly who, I think, is the antagonist this book has been waiting for. He's called the Perforated Man…and there's nothing even remotely amusing about him. 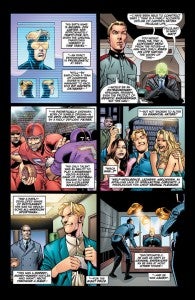 GX: So we finally see the on-again, off-again combative relationship between Booster and his son coming to a head here, from hard words to a blast in the face. Is that something that you've been planning all along? And did you or Keith talk to the previous creative teams about it? Conflict between them has been bubbling just under the surface since issue 1. JMD: Nothing planned here, no conferences with previous teams. it's just the way the plot and dialogue worked themselves out. GX: That said, Rip calls him "Michael" in this issue. He's never done that before, and someone (perhaps Keith) has used that as a clue before (in 52, when Skeets did it). Is it possible that Rip isn't himself? JMD: Again, it seemed like the right thing in the context of the story. There's no grand plan at work. At least not yet. GX: Also, any chance we'll see Officer Broderick, the 25th Century cop who chased Booster all through volume 1 in the '80s, as Booster returns to the future to stand trial? JMD: No chance whatsoever. How's that for being definitive?