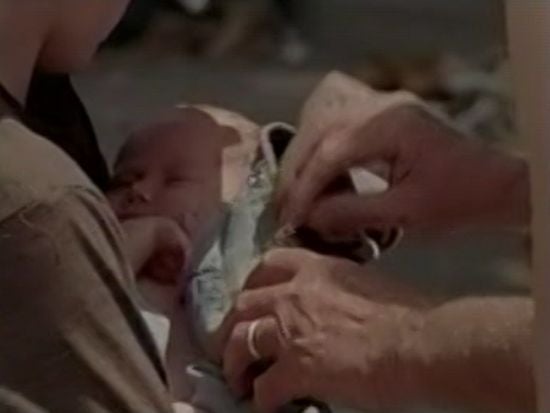 In a preview for the “Say The Word” episode of The Walking Dead, Hershel warns the others that the baby needs formula and soon or she won’t survive. Then, Daryl and Maggie appear to hurry off on a formula run. Hopefully, they will be able to find an abandoned store with unexpired baby formula still on the shelves.

With the producers of The Walking Dead showing their willingness to kill off main cast members, the question arises of if they would actually be willing to kill off a baby. Spoiler warning, in the comic books, things happened much differently than on the TV show in regards to the baby. In the comics, Lori survived the birth of the baby. However, when The Governor attacked the prison, Lori was shot in the back, while running with the baby. Lori fell on the baby crushing it to death.

Since the TV show took a different route, could it be that producers might find the thought of killing a baby to be to intense a scene for TV viewers? In an interview with the LA Times, creator and executive producer Robert Kirkman addressed this very question. Kirkman said, ““I would say that while we do worry that killing a baby on TV is probably going to alienate some people, and it would be a pretty harsh thing, I don’t know if that would keep us from doing that if we thought it was necessary for the story.”

So if you were wondering if there was any line that The Walking Dead producers might not cross, the answer appears to be "no." Don't assume even the baby is safe on the show.

The Walking Dead: Baby Could Die