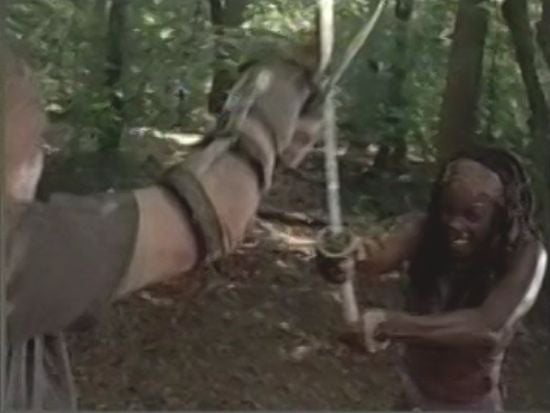 The Walking Dead “Hounded” episode actually answered a lot of questions. We found out what happened to Carol and who was on the phone with Rick. But while many questions were answered, viewers were also presented with some brand new questions. Here are five questions raised in the “Hounded” episode.

5. What does Hershel hear on the phone? – After Rick tells Hershel that he got a call, Hershel picks up the phone and listens for a moment. Does he hear a dial tone? Or is the phone dead? Does he realize Rick might be losing his mind?

4. Does Andrea get off on the violence? – After Andrea stabs a walker in the head with her knife, she seems almost exhilarated by the killing, bragging that’s how it’s done. Later, she admits to The Governor that she was actually excited by the arena fights.

3. Is Merle scared of Michonne? – When Neil wants to keep chasing Michonne to avenge his friends, Merle refuses. Merle says, “She’s ain’t right in the head. She’s gonna die. Ain’t worth our time. Definitely ain’t worth our blood.” Merle even kills Neil to keep him from telling The Governor that Michonne got away. Has good ole Merle finally met his match?

2. Does The Governor realize Merle is lying? – When Merle returns and tells The Governor that they lost all three guys, but he killed Michonne, The Governor asks if he has her head and the sword. Merle says that they got caught in a crowd of walkers and lost them, but The Governor doesn’t look happy. The Governor’s glance back at Merle as he leaves also hints he suspects something.

1. Will Rick trust Michonne? – Rick hasn’t had the best of experiences with strangers. With Michonne showing up at the prison gate with a basket full of formula, will Rick believe her story? Or will he think that she maybe did something with Glenn and Maggie?