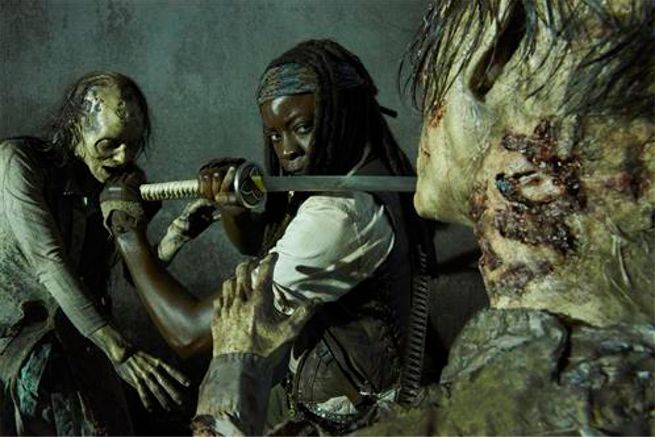 The titles for the next three episodes of AMC's The Walking Dead have been revealed, Spoiler TV writes.

Season Five, Episode Five will be titled "The Choice," followed by "Heart Drift" and "Crossed," the site claims. Let the speculation begin as to what those cryptic titles mean, since The Walking Dead tends to use double entendre in many of its titles.

The Walking Dead Wiki says that "The Choice" will be written by Heather Bellson and directed by Ernest Dickerson. It would be the first writing credit on the series for Bellson, who was listed as a producer on the first two episodes of the season. Dickerson, who also has experience on The Wire and Under the Dome, has directed a number of The Walking Dead episodes, most notably "Too Far Gone," which depicted the survivors' final showdown with The Governor.

Matt Negrete is reported to have written "Heart Drift" for director Seith Mann. Each of the two have a bit of experience with The Walking Dead, with Negrete having written and Seith Mann having drawn two episodes each (never previously together). "Crossed" was apparently written by Seth Hoffman and directed by Billy Gierhart. Gierhart, best known for runs on Huff and The Shield, will be directing his first episode of The Walking Dead. Hoffman is credited with writing "Us," "Claimed" and "Too Far Gone."