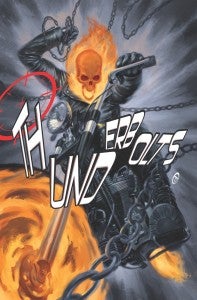 The "#1" appearing in thebackground of Marvel Comics's dozens of teaser images over the last three weeks, all promising clarification at New York Comic Con this weekend, has been explained. Apparently while there will be some new launches (Peter David's All-New X-Factor, for instance), many of these teasers will reflect special issues that will be treated as a "season two" or a "second #1," but the comics's actual numbering will resume the following issue. One such title is Thunderbolts, where Ghost Rider will join the team in the creatively-numbered "Thunderbolts #20.NOW = Thunderbolts #1," according to an interview with writer Charles Soule at Newsarama. He'll take the title on in February with artist Carlo Barberi. "The way the book works these days is that each team member has been brought onto the team because they have a special mission that they weren't able to get done by themselves. The same offer has been made to everyone, which is that you can use the team to do your special missions, but when we're not doing one of yours, you have to help with a problem," Soule explained. "So Ghost Rider comes on the team to help out with a Thunderbolt/Ross problem. They have an existing relationship from the comics — they've had adventures before. So he knows him, Venom knows him. So they have this problem, and they're trying to solve it, and they're like, 'Hey, maybe Ghost Rider could help out.' So they sort of call him up, so to speak, and they have an adventure, and we'll have to see where things go from there."