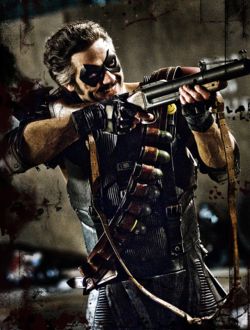 Even though the Watchmen movie consists of a cast of lesser known actors and actresses attempting to play some very complex roles, there are amazingly no poor acting performances in the Watchmen. Every single major cast member does an amicable and believable job playing the various characters of the Watchmen. It is likely that the Watchmen movie will help to ignite the careers of several of the stars of the movie. While all the cast members are good, which actors or actresses cross over into greatness? After watching the Watchmen, there were multiple performances that stood out. If there is a weak spot in the acting in the Watchmen movie, then many are pointing to Matthew Goode’s portrayal of Ozymandias. In some of the early scenes Goode does come across as a little awkward as Ozymandias, but I think that is an intentional part of the character development. Goode is attempting to set Ozymandias up as the wide-eyed optimist, which helps to make what Ozymandias eventually does all the more shocking. I really don’t have any criticisms of Goode’s performance, but I would have to agree in ranking him the weakest of all the major characters, simply because everyone else was so amazing. There were juicier scenes for the other characters in the movie, so they overshadowed the role of Ozymandias to a degree. Even though Billy Crudup plays Dr. Manhattan perfectly, the character is virtually emotionless with limited facial expressions. As is mentioned in the movie, occasional eye blinking is the only thing that gives away the mood of Dr. Manhattan. Because Dr. Manhattan isn’t the live wire that many of the other Watchmen are, Crudup’s expert portrayal of the character might go unnoticed by many. Patrick Wilson does a great job playing Nite Owl II. At times, it’s almost as if he is channeling Chevy Chase. Early pictures of Wilson in the role had many fans worrying if he could really play impotent, overweight Dan Dreiberg. Wilson pulls it off and makes viewers believe that the bumbling, lovable Dan can turn into the Nite Owl II. Malin Akerman succeeds in making Silk Spectre II seductive with an underlying air of innocence. Akerman’s portrayal of Silk Spectre was one of two roles in the movie where I think the performance was not only accurate to the Watchmen comic book, but in many ways took the character to a higher level than was shown in the comic book. Akerman is able to transition from the na ve, young superhero at the first Watchmen meeting to the strong, butt-kicking version that helps break Rorschach out of prison. While there haven’t been a lot of female superheroes portrayed on the big screen yet, Akerman is certainly the most visually arresting one so far. Jackie Earle Haley has the juiciest role in the Watchmen, as Rorschach is the closest thing to a central character in the film. Of all the actors, Haley carried the most weight on his shoulders, because if he had blown the role of Rorschach, then the whole movie would have been blown. While Haley is hidden behind a mask for much of the movie, he makes the most of his time as Walter Kovacs. The prison scenes involving Haley as Kovacs rank as some of the best scenes in the entire movie. He also delivers the best line of the movie when he tells a group of prisoners, “I’m not locked in here with you. You’re locked in here with me.” However, in the end, it is Jeffrey Dean Morgan as the Comedian, whose acting career will likely benefit the most from the Watchmen movie. While Jackie Earle Haley only gets a couple scenes outside of the mask, Jeffrey Dean Morgan’s face is shown repeatedly as it delights in the death and destruction brought forth by the Comedian. Like Akerman does with the Silk Spectre, Morgan takes the Comedian further than what was shown in the comic book. The most impressive part about Morgan’s performance is that he takes a completely, reprehensible character and actually succeeds in making him somewhat likable at times. The Comedian is an attempted rapist and a murderer, not just any type murderer, but an especially vile murderer who even kills a woman carrying his unborn child. Morgan is able to deliver lines that show the Comedian’s warped view of the world with sincerity and believability. After the Comedian shoots a pregnant woman, he turns the blame to Dr. Manhattan for not stopping him. He ironically even accuses Dr. Manhattan of drifting out of touch and not really caring about human beings. In another scene, he justifies the fact that he has killed women and children as being ok because it was war. Goode, Crudup, Wilson, Akerman, Haley, and Morgan should all be able to hold their heads high over the performances they delivered in the Watchmen. It’s never easy to take on comic book character roles, especially ones as complicated and that come with such high expectations as the Watchmen. That all six were able to stay so true to the comic book is an impressive accomplishment.