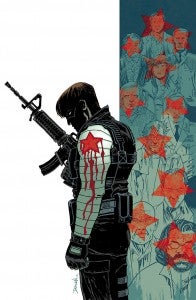 In a surprise announcement earlier today, Marvel Comics told the audience at Fan Expo Canada that Ed Brubaker will be leaving Winter Soldier effective January 2013, to be replaced by writer Jason Latour.

Latour, best known for his art, has made a name for himself recently writing for 12 Gauge Comics, where he works on the acclaimed crime title Loose Ends with artist Chris Brunner.

"One of the things I'm seeking to delve into is -- what exactly is the line?" Latour said in an interview at Comic Book Resources. "Where and when does Bucky Barnes end and the Winter Soldier begin? There may not be an answer to that question -- and that possibility is a very scary thing he'll try to face and learn to live with."

When it was recently announced that Brubaker would leave Captain America, he talked a good deal about heading creator-owned for the most part, but that he would stick around on Winter Soldier for a while. Whether the change of heart regarding this title means he'll be leaving corporate properties, or that he'll simply be taking on another title as part of the Marvel NOW! relaunch was briefly a question, as it wasn't specified by Marvel. Brubaker, though, took to Twitter to clarify things.

"To end all speculation," tweeted the writer, "Cap 19 and Winter Soldier 14 are my last Marvel books for now. But I may return, because Marvel has been my home." He added, "My next comic project, beside Fatale, will be announced in December or January. And you'll s--t when you hear about it. In YOUR PANTS."