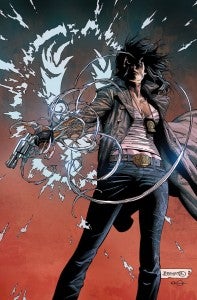 The 150th Issue will hit shelves early next month, and the issue will be special for a number of reasons.  First, it's a celebration of one of the longest running series with a single female lead.  Second, it's Ron Marz's 70th consectutively written issue.  It's also both Marz and artist's Stjepan Sejic's final contribution to the comic. "It's bittersweet, definitely," Marz reflected. "Sara has been an almost daily presence in my life for more than seven years, so it feels a little weird to be going our separate ways, at least in terms of the WITCHBLADE monthly. But even if this seems like Stjepan and I are breaking up with Sara, I know we'll see her again in ARTIFACTS. Sara will definitely be a presence in that book going forward. So we'll be reunited. And, uh, it feels so good." Tim Seely (Hack/Slash) and Diego Bernard (The Man With No Name) will take over the creative reins.  'Witchblade' #150 will have a preview of Seely and Bernard's work in 'Witchblade' #151. But Image Comics and Top Cow Productions aren't stopping with creative changes.  #150 promises 'a major turning point in the life of Sara Pezzini.'  If you aren't familiar with 'Witchblade', the comic surround NY City Police Detective Pezzini, the bearer of the Witchblade, a deadly and powerful gauntlet.  And while Sara has typically led a balanced life, she's about to be forced to make a decision between her career and the Witchblad. To top it all off, 'Witchblade' #150 is a 48-page full-color book with FOUR covers. It hits shelves January 4th.