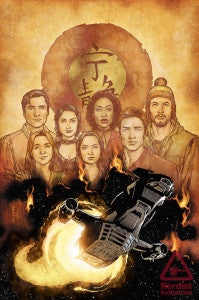 The series, according to Nerdist, also has the potential to become an ongoing, presumably dependent upon sales.

The series, titled Serenity: Leaves on the Wind, will allow Whedon to "plow forward into the future of these characters and tell new stories which has been a lot of fun."

Of the title, he added, "I called it that because I felt like it was a way to honor Wash and the effect his death had on the crew. They are still reeling from that event in many ways, and beyond that they are drifting a bit, pushed all over the ‘verse by forces out of their control."

Serenity: Leaves on the Wind kicks off the last week in January.