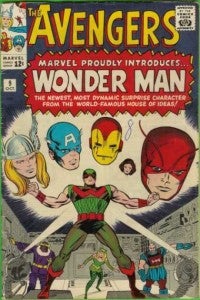 A few days ago

, MTV reported that Game of Thrones creator George R. R. Martin would like to write a Dr. Strange story for Marvel Comics--but that it was unlikely to happen because before he took the job, he would bring in an army of lawyers to make sure that his contract didn't allow future writers to undo his story. Now, he's got some words about The Avengers--the comics, not the Joss Whedon film--and how a particular story he read as a kid has influenced the way he writes ever since. You can check out the video below. In The Avengers #9, fans got their first look at Wonder Man, who would eventually become a fixture of The Avengers and whose brain patterns provided the personality for The Vision, a role that's being discussed by fans as a possible way of bringing back the deceased Agent Phil Coulson in the Marvel Cinematic Universe. Speaking of the original comic, though, Martin explains, "In that issue Wonder Man is a villain who pretends to be a hero, and joins the Avengers as a hero in order to betray them from within--and at the end he can't go through with it and dies as result. And boy, you look at that! I loved this issue. In fact it blew my mind." "I loved the fact that they killed him, and I loved the fact that [a] villain pretending to be a hero, became a real hero at the end. That kind of reversal, dealing with themes of betrayal and redemption--and you look at my work and you see the fingerprints of something like this all over it."

Game of Thrones Creator Draws Inspiration From The Avengers

The Good Life Review: A Life of Hardships