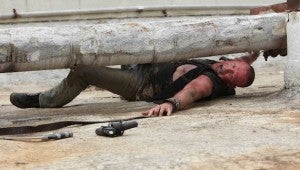 While doing interviews in support of Call of Duty: Black Ops  - Call of the Dead, veteran character actor Michael Rooker (best known to comic book fans as Merle Dixon from The Walking Dead or Jared Svenning from Mallrats) told Hero Complex that, while he remains tight-lipped about the specifics of the character's return, Merle will be back on The Walking Dead. "There's an uncertainty about Merle – like he'll come back when you least expect it," Rooker said in the interview. "He's the boogeyman, and viewers love that suspense. The number one question I'm asked is, `When is your character coming back?' I can't say when, but I promise it'll be a wild ride." Dixon and his brother Daryl were introduced last season as a pair of almost-villainous racists who created as many problems for the survivors on the show as they helped to resolve. Somehow, the pair still built a following. Daryl is a centerpiece this year, searching for a lost little girl and subtly steaming up the screen with Andrea. The last time we saw Merle alive, he was handcuffed to a pipe on the roof of a building; later, when part of the crew went back for him, he was gone but his hand, and the handcuffs, remained. Fans have speculated ever since that Dixon had survived (no body, no death,  after all--this is still genre television) and Rooker here confirms those suspicions.