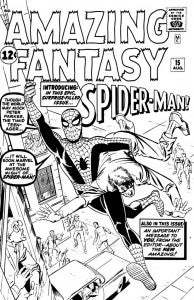 ended today with a blockbuster 700th issue, the end of Peter Parker's adventures (for now) and the introduction of a new Spider-Man altogether for Dan Slott and Ryan Stegman's upcoming Superior Spider-Man series. Noting that Peter Parker was a huge part of the character's appeal over the years, Slott joined with a handful of notables, including Stan Lee, Norman Reedus and cast members from Teen Wolf, The Jersey Shore, The Walking Dead and Broadway's Spider-Man: Turn Off the Dark to bid a fond farewell to the character. "You want to give a decent good-bye to a character that has been a part of the culture for fifty years," says series editor Steven Wacker in the tribute.