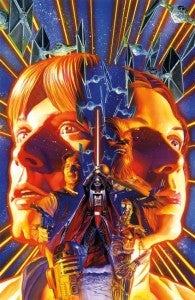 What does the acquisition of Lucasfilm by the Walt Disney Company and the announcement of a new trilogy of Star Wars films mean for the Star Wars comics from Dark Horse? At the time Disney bought Marvel Comics a few years back, Boom! Studios was publishing an aggressive slate of popular all-ages comics based on Disney-owned properties like Darkwing Duck, Chip 'n' Dale's Rescue Rangers and more. Almost immediately, fans started to wonder how long it would take to strip those licenses away from Boom! and bring those properties to Marvel, which turned out not to be very long. That was a pretty young and untested relationship, though, while Dark Horse has been publishing popular and award-winning Star Wars comics for years. In fact, the publisher just recently announced its first-ever series set during the timeline of the existing Star Wars films, written by Conan the Barbarian and The Massive author Brian Wood. ComicBook.com reached out to Dark Horse for comment, and received word back that there's no danger of that book or any others disappearing anytime soon, although the long-term prospects are somewhat more ambiguous. "Dark Horse and LucasFilm have a strong partnership which spans over twenty years, and has produced multiple characters and story lines which are now part of the Star Wars lore," said Mike Richardson, President of Dark Horse Comics. "Star Wars will be with us for the near future. Obviously, this deal changes the landscape, so we'll all have to see what it means for the future."