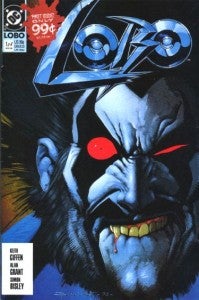 With Justice League reportedly falling apart and Green Lantern a critical and box office disappointment, most fans had probably come to peace with the fact that it would be a while before Warner Bros. took any DC Comics characters into outer space again. In case there was anyone still holding out hope, though, Dwayne "The Rock" Johnson told MTV News that he's no longer attached to Lobo. Back in July of 2012, the actor confirmed that he was in talks to play the cosmic bounty hunter in a movie that was reportedly set to take place mostly on earth. From his phrasing, it sounds as though the project itself is probably dead in the water. Asked whether the project is something that he and Warner Bros. are developing, the former WWE star responded, "It was for a minute but then it kind of just went away--as things happen in Hollywood. For a minute I was interested in it, then [the film] went away." You can see the interview, which also deals with his upcoming Hercules movie from director Brett Ratner, below.