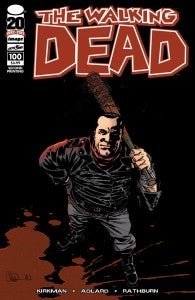 Having sold through its entire, massive print run to become the best-selling single-issue comic book since 1997, Image and Skybound today announced that a second printing of The Walking Dead #100 will be coming to comic book stores. And, yes--there will be (yet) another new cover for the issue. The villain at the heart of the issue, featured on the cover with his weapon of choice "Lucille," is poised to become a recurring threat for Rick and company, arguably the first serious threat they've faced since The Governor and certainly the first villain in a while who wasn't dispatched just as he was getting interesting--unfortunately for some. While falling just short of letting the cat out of the bag, Image's press release certainly plays up the plot twist at the end of the issue--one which Skybound had fought to keep as secret as possible during the run-up to the hundredth issue. "A harrowing and heart-wrenching event in the lives of Rick Grimes and his band of survivors, The Walking Dead #100 has been critically acclaimed for its examination of violence and mortality.," said the press release. Featuring the death of a key character, the issue has been alternately praised for its boldness and emotion or lambasted for its needless brutality and predictable violence. It also doesn't seem totally implausible, given leading comments that the producers keep making, that the events of this issue could inspire the first episode of The Walking Dead's third season on AMC. In any event, don't expect the inevitable series of imitators--like Marvel's Uncanny Avengers #1, shipping with 12 variant covers to rival the 13 that helped lift The Walking Dead's orders--to successfully topple this record-breaking title anytime soon. The Walking Dead #100 has the feel of The Avengers movie--it's the perfect comic that came along at the perfect moment, and the next big, exciting franchise to come down the pike can't just expect to overcome that.

The Walking Dead #100 Gets a Second Printing