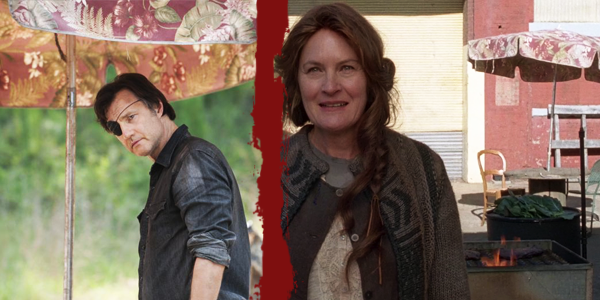 Throughout the season, we try to keep up with Easter eggs on AMC's The Walking Dead (and other comics-based TV series) and generally do a pretty good job. Between our own eyes and the help of social media and Reddit, it's rare that anything comes up weeks or months later and surprises us...but this time around, we have to admit being pretty impressed.

Revealed last week on TheWalkingDead.com, The Governor has a bit of a presence felt at Terminus -- as the picnic umbrella he used earlier in Season Four appeared behind Mary at Terminus's outdoor dining area in the penultimate episode of the season.

Whether that's a sign that some survivors of The Governor's camp made their way to Terminus (and either joined the Terminians or were captured/killed/eaten) or just that someone en route to Terminus passed their camp and scavenged what was useful isn't clear, but if the former is true, it may present some interesting story opportunities for Tara (Alanna Masterson), who was a member of that camp.

Whether that story would be that she encounters (dead or alive) someone she recognizes or just that admitting as much would reveal to Maggie that Glenn's story about how he came to meet Tara (that he met her on the road, rather than at the scene of the prison battle) doesn't ring true? Could go either way.

Or, of course, it could remain just an Easter egg and nobody will ever notice that it's the same one or question how it came to be there.

The fact that we and everyone else online scrutinized the heck out of that first shot of Mary, though, and didn't notice the umbrella? Pretty cool.

The Walking Dead: A Huge Easter Egg We Missed