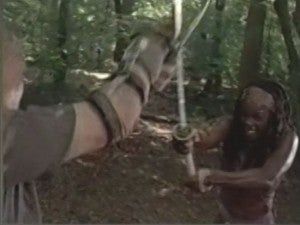 In a preview of next week's episode, we saw Merle fighting Michonne. There are basically two ways this could have happened: 1.) That secretive conversation he had at the gates was about keeping an eye on her and eliminating her as a threat, or 2.) Merle seeks out Michonne for assistance escaping Woodbury/finding Daryl and finds himself locking blades with her mostly because she's distrustful of a white supremacist from the crazy town she just left. Since we know the likelihood of either Merle or Michonne dying in this fight is pretty slim (it would irreparably damage the character who did the killing, given how popular they both are), and that if it were a real fight-to-the-death these aren't characters who would let the other one get away to be a threat later, it seems to me that the most likely scenario is the second. Merle is adopting a pretty defensive posture in the screen capture above, while Michonne certainly seems to be intending to do damage. That seems to support my position, especially if the alternative is that he's chasing her. How does one come up behind somebody and end up on the defensive? It's possible, especially when facing someone as skilled as Michonne, but frankly seems unlikely. Of course, there's still the possibility that the photo we saw of Andrea jumping the Woodbury wall is tied to this--if she were to join them at a key moment in the fight, with a gun, she could presumably stop the fight. Still, it seems more likely than not that rather than be briefly and brutally confrontational, the two will end up traveling together, conspiring together, whatever it is that they do. And the crazy, hook-handed white supremacist teaming up with the bad-ass, sword-wielding black woman really just seems like its' destined to be the best road trip/buddy movie in the history of The Walking Dead.