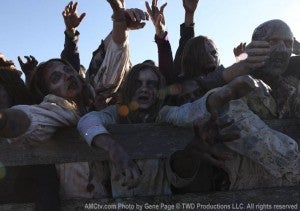 This is it, folks--after a season that has seen the numbers and spirits of our group of survivors dwindling, the Greene Farm is under siege by walkers as the group struggles to adjust to the events of the last couple of weeks, with the loss of two major characters. It's the most talked-about finale yet this year, and we're going to start talking about it, too--right now. As always, remember that these recaps are intended for viewers who have already seen the episode, or for whom spoilers are a non-issue. SPOILERS ON. The episode begins in flashback--in Atlanta, where zombies feast on human and animal remains alike until they're drawn by the sound and sight of a helicopter through the streets. Dozens of walkers band together, shambling down the highway and into the country,  before walking right into a cow fence (perhaps the one Hershel told Rick had been damaged?). There's a bottleneck, until literally hundreds of walkers pressing forward against one another finally cause it to burst and find themselves in the woods behind the Greene farm. All this time, they've been fairly aimless, until the sound of Carl's pistol moves them out of the woods and into the clearing where Rick and Carl are walking away from Shane's body. Inside the farmhouse, Daryl and Glenn arrive moments after the shot, but Rick and Carl aren't back yet. Daryl begins to tell the group that he believes Shane killed Randall--he reveals that Randall was in fact not bitten before he turned--but is sent back out to find Rick and Shane. 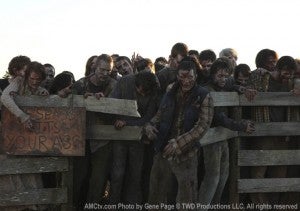 In the clearing, Rick tries to help absolve Carl of the guilt of killing his second father figure, reminding Carl that by the time people rise up and walk again, they're already gone. Carl asks his father what happened with Rick and Shane, and how Shane died. The two pause for a moment while Rick tries to muster up the strength to explain himself, but it's then that he hears the horde of walkers coming from the tree line and they  begin running home. Some of the herd are already around them, so they have to run to the barn, locking themselves in and the walkers out in an ironic twist on the Greenes' earlier policy of locking up their loved ones until a cure could come. Having realized the size of the herd, the rest of the survivors are in motion inside trying to secure the house--and then, finally, Lori realizes that Carl is missing. Carol joins her in looking for her son while Rick and Carl see the doors starting to falter under the pressure from the walkers. 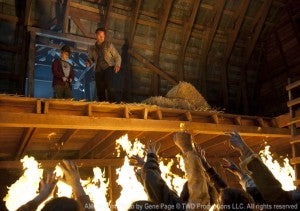 The other survivors have a plan--they hope to kill as many walkers as they can and then use the cars to draw stragglers away from the farm. Rick has a plan, too--he douses the barn in gasoline and gives Carl a Zippo lighter, instructing him to drop it when the herd of walkers follows him inside. Drawing them inside and then taking high ground in the hay loft with Carl, Rick has him drop the lighter and set and immediate blaze to the barn and a number of walkers. Using Hershel's truck and a second car, a group of survivors including Glenn, T-Dogg, Maggie and Andrea lead as many walkers as they can away from the farm, blasting away from the car doors as they do. Inside, the remaining women notice the fire; Carol and Lori are frantic looking for Carl, until they see the barn fire. At the camper, Johnny is firing off shots at the walkers while Daryl does the same from his motorcycle. Sensing that Rick and Shane are probably responsible for the barn fire, Daryl sends Jimmy to check on them, which gives Rick and Carl an escape route from the hay loft (the roof of the camper), but not from the scene, as Jimmy is immediately set upon and ravaged by walkers inside of the camper. 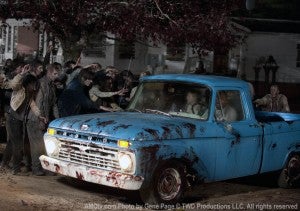 Nearby, the survivors in the cars are blasting away while in motion as Rick and Carl head at top speed for the tree line. Hershel just stands in the yard, blasting away with a shotgun at the walkers in the front yard while Carol and Lori discuss what to do about Carl and how to best escape. Lori, firing away with a handgun, heads for Hershel, apparently not heeding his previous warning (seen in previews) that the farm is his home and he'll die there. As the group makes their escape from the building, though, Patricia is seized upon and killed, taken right from Beth's grasp. The women manage to get Beth away from him, but when they send Andrea to recover Carol, the truck is set upon by walkers and they can't wait for her to return. At the same time, Maggie and Glenn's car is swarmed and Glenn has to force her to leave the farm and fend for herself, not worrying about the group. 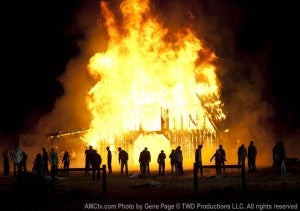 Stopping to reload, Hershel is set upon from behind, but before he can be hurt, Rick kills the walker. He persuades Hershel to follow him and Carl to a waiting truck, and leave the farm in search of Lori. Andrea tries to hail the vehicle, but is unsuccessful and has to head for the treeline. On the edge of the property, Daryl is watching the barn burn when he hears human screams and turns back on his motorcycle. It's not Andrea he finds, tough; Carol is stumbling along the fence line running from the walkers and he manages to pick her up and make off. In the truck, Rick tries to console Carl in the front seat while Hershel laments the loss of his farm in the back. Walkers wander the property behind them while the barn burns and eventually crumbles. On a backroad in the woods, Daryl blasts through groups of walkers while Maggie and Glenn take a similar trail. Glenn argues that they should circle around to the highway where the group had left supplies for Sophia, but Maggie won't because the herd came from there. She's hysterical, worrying about her father and the others back at the farm, and Glenn is trying to keep her calm and focused on survival for the time being until they can double back for whoever else made it. Then, he finally tells her that he loves her, and that helps. 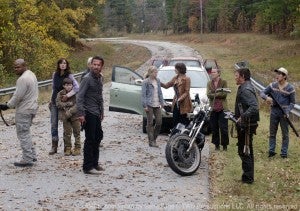 On the highway, near where Sophia disappeared at the site of the traffic jam, Rick and Carl get out of the car and Carl quickly begins yelling at him that they need to go back for Lori. Rick can't get him calm, and Hershel tells him that he needs to get Carl to safety, but that he can wait on the road for his family. Rick refuses to break up the group. T-Dogg is flying down the road in Hershel's truck, refusing to stop or head back to the highway when Lori demands it. When she opens the door in motion, though, he's swayed and agrees to take her back to the highway to look for Rick. There, Rick is circling the truck with Hershel and Carl, each carrying a gun and watching a lone walker stagger through the traffic jam. Hershel continues to tell Rick that he needs to protect Carl and just walk away--something that Rick has a hard time arguing in spite of the fact that he doesn't want to leave his wife or Hershel's daughters unprotected. When he assents to Hershel's plans and starts telling Carl that they're going to head for safety, he's interrupted by all three of the vehicles from the camp arriving at once. 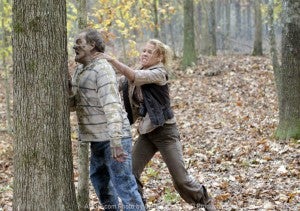 The group gathers to discuss what happened back at the farm, and they determine that they actually saw each of the losses take place except for Andrea, at which point Daryl wants to return to the camp for her. Rick nixes the plan. As they determine that Andrea won't be at the farm anymore--that she is either dead or made her escape--they agree to depart, leaving the site--and the haunting signal they left for Sophia--behind. In the woods near the farm, Andrea is still running from a small herd of walkers. She stops, realizing how little ammunition is left in the gun bag, and has to take out a walker by hand before working deeper into the trees, shooting down a few more and attracting even more unwanted attention. On the road, Rick realizes that his truck is almost completely dry; he honks to stop the convoy and the group decides to set up camp for the night and then find gas in the morning. When the group contests, Rick tells them that there has to be a place where they can not only survive but begin to build a life. Maggie argues that they'll never truly be safe and it's dangerous to think that they are, but Hershel stands with Rick, telling her that they just won't let what happened at the farm happen again. Then, Daryl tells Rick that he found Randall, and that he knew Shane had killed Randall and that Randall had turned without being bitten. Rick, then, tells the group that everyone is infected. At the CDC, Jenner had whispered to Rick that whatever this plague is, everyone is a carrier and that death just activates it. Everyone jumps on Rick immediately for keeping the information from them, especially Glenn who likens it to his knowledge of the walkers in the barn, but Rick simply storms away, leaving the rest of the group to process what had happened. Lori follows him, and he tells her what happened with Shane. He confirms that he only knew Jenner was right after Shane turned. When he tells her that Carl was the one to put down zombie Shane, she starts to sob and moves away from him. In the woods, Andrea is still trying to evade the herd. Using her gun as a bludgeon and her knife, she takes out several of them quietly and up-close before finally being brought to the ground by one. As she struggles to escape his grip, the walker's head is severed from behind. A hooded figure stands quietly over Andrea, leading two chained and incapacitated walkers around with it. Comic book fans will know this woman as Michonne. TV fans, you're missing out. Back at the fire built by the survivors, Carol tells Daryl that she doesn't feel safe around Rick. Daryl tells her that Rick has done alright by him, but she continues to press him. Maggie, too, tells Glenn that she thinks they should leave and take their chances away from the group. Hershel nixes it immediately. They hear noises in the dark behind them and start to panic, but Rick tells them not to leave. When challenged, he blows up at the group, telling them, "I killed my best friend for you people, for Christ's sake!" In the stunned silence that follows, Rick explains the Shane situation to the group. Carl starts to sob into his mother's chest while Rick rationalizes the act to the rest of the group. He challenges whoever doesn't believe in him to leave and see how far they get, but the group stands pat. He tells them that if they stay, it's no longer a democracy. In spite of a round of suspicious and scared looks, nobody leaves, except Rick who heads off into the trees alone. The camera pans up and away from the group, through the woods and over the rise to a prison in the distance.

The Walking Dead Recap: Beside the Dying Fire (Season 2 Finale)