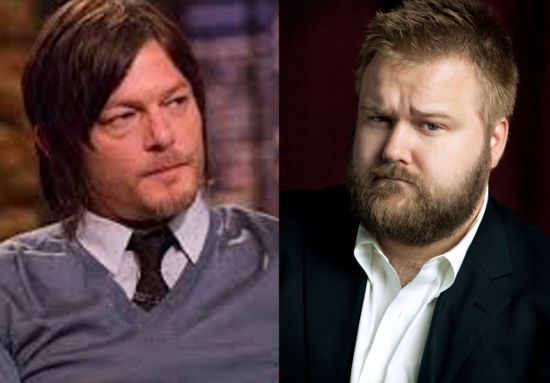 As fans of both The Walking Dead TV series and The Walking Dead comic book know, there are a couple characters on the TV show that have never appeared in the comic books. The most famous TV only characters are brothers Daryl and Merle Dixon. At the Amazing Arizona Comicon this past weekend, Walking Dead creator Robert Kirkman talked briefly about the possibility of any of the TV only characters from AMC's Walking Dead being added to the comic books. Kirkman said, "I guess it wouldn't be a bad thing if Daryl Dixon showed up in the comic. But I don't know. I really like the separation. I like that when we sit down to write the show one of the first things we deal with is: 'How does Daryl Dixon change this story?' Because we always start from: 'Ok, we like this part of the comic. How are we going to do it?' Kirkman continued, "And it's just always interesting to get in there and be like, 'Oh, well his existence and the fact that his personality is this, and he would behave this way, means that he would react to this person differently than this and differently than that.' And it's just really a great thing for the show that he doesn't exist in the comic. And I really like that." Then, Kirkman added, "But yeah, I don't know. It would be cool if he was in the comic, but I don't really have any plans on doing that. But I guess he would be the one if I was going to pull any character from the show into the comic, it would be him. Mostly just because I love Norman [Reedus]. Handsome dude."