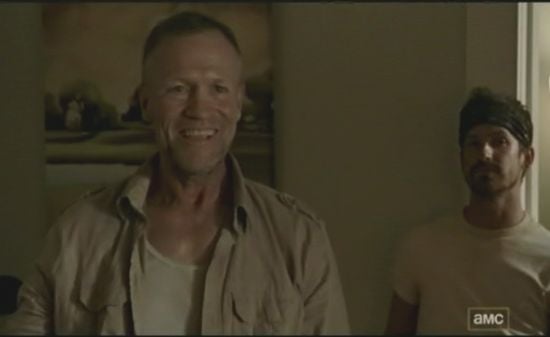 One of the questions Comicbook.com raised after the Walk With Me episode of The Walking Dead was if Merle could possibly be going soft. In the episode, Merle showed a rare moment of compassion upon learning of the death of Andrea's sister. Merle said, "Your sister. She was a good kid. I'm sorry to hear it." Later, in the same episode, Merle looked uncomfortable after The Governor shot a fleeing soldier in the back. It turns out that we're not the only ones that have noticed that our old pal Merle might be developing a conscience. In The Talking Dead bonus episode for "Killer Within," host Chris Hardwick speculated that Merle might be on his way to becoming "an unlikely hero." Hardwick pointed out that it appeared like there was a little bit of tension building between The Governor and Merle. Merle didn't look like he was happy, when The Governor told him that he couldn't go look for his brother. IronE Singleton, who plays T-Dog, reminded Hardwick that in the first season Merle said that when his commanding officer told him to do something that he became insubordinate and kicked out his teeth. Hardwick also brought up that Merle seemed to have a moment with Andrea, where he got human and started flirting with her. Could it be that the writers are setting it up where The Governor attacks Andrea and Merle comes to her rescue? Considering everything that has happened on The Walking Dead this season so far, it probably wouldn't be surprising if one of the show's most reprehensible characters somehow morphed into a good guy.

The Walking Dead: Will Merle Become An Unlikely Hero?