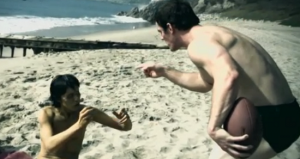 Every Monday on Conan, the TBS late night comedy show hosted by Conan O'Brien, the host takes on YouTube submissions from fans who attempt a game of "Stump Conan and Andy" by trying to point out factual errors made during interviews and sketches on the series. This week's episode, which aired last night, featured Conan poking fun at a fan of The Walking Dead and then screening a purported "deleted scene" from the first season of the series. The fan's concern was that O'Brien, seeing zombies in riot gear in The Walking Dead's season premiere, said something about zombies being suddenly more able to defend themselves. The fan pointed out that the prison guards had died in the riot gear, and the zombies hadn't figured out how to put it on at all and were incapable of learning something like that -- which led to the scene. 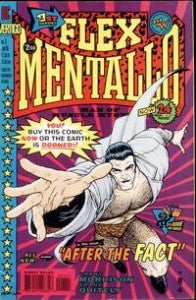 The scene, which you can see below, is a parody of the old Charles Atlas ads that were so popular in comics for years. They follow the pattern of a 90-pound weakling (who has somehow managed to score a gorgeous girlfriend) having sand kicked in his face and the girl in question stolen by a muscle man who mocks him. The weakling them takes it upon himself to train with the Charles Atlas program, growing to superheroic proportions and returning to the beach for revenge. It's a trope of comic books that has been parodied any number of times, but the most obvious, famous and ludicrous one (with the possible exception of this Walking Dead sequence) is Grant Morrison's Flex Mentallo, which turned the hero of those ads into the star of his own comic, rather than just an ad in the back of others. The folks who hold the Atlas trademark weren't thrilled, though, and the book stayed out of print for a long time before recently returning as a deluxe hardcover. I don't know about you, dear reader, but I choose to believe that this "scene from The Walking Dead" happens in the same universe as Flex Mentallo.