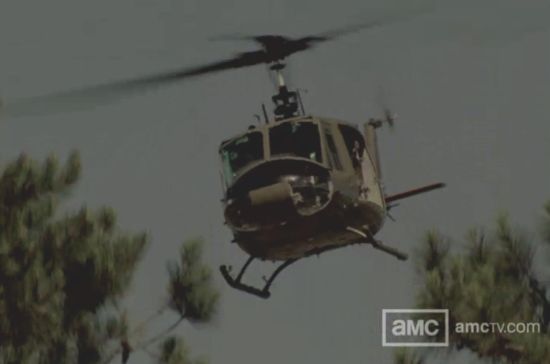 Fans of AMC's The Walking Dead will remember a helicopter spotted in the pilot episode over Atlanta, and then again during the second season. At the time, most just assumed that it was a line being drawn from the opening of the show through to Woodbury, as in the comics there was a downed helicopter that came into play around the same time The Governor's people made their first appearance. It would seem, though, that there's more to it than that. "They are remnants of the civilization that existed before the apocalypse," executive producer Glen Mazzara told The Hollywood Reporter of those inside. "If there are bands of survivors, there are also rescue workers, soldiers and people who are still on watch trying to put the pieces back together. That helicopter is somebody who we'll meet in an episode, and that will be answered."

The idea of The Walking Dead--the TV series--flirting with the idea that there are still those out there working to undo the plague is not unheard of; the first season finale more or less rested on that notion, and gave apparent confirmation to things that have never really been discussed in the comics (such as whether the rest of the world was affected or just the U.S.). Still, that episode was not widely liked by the fans and to explore similar terrain would likely require that terrain to be handled incredibly well so as not to alienate the viewership. All that said, the team has been eager to point out that the comics are a guide, but not much more, and that they don't feel obliged to directly adapt them. So look for more "new to TV" concepts and characters--and just hope that they're more Daryl Dixon than The CDC in the future.

The Walking Dead's Helicopter Question Will Be Answered