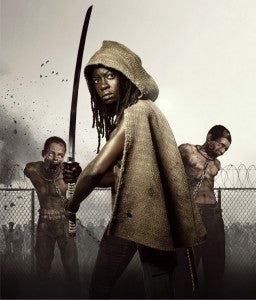 In a new interview ahead of her New York Comic-Con appearance on Saturday, actress Danai Gurira detailed some interesting facts on being cast for The Walking Dead--not least of which is that she hadn't seen the series before she landed the audition, and doesn't ordinarily like watching zombies. "I knew it was considered a really great show and that it had shocked critics and gone beyond its genre and become a really beautiful drama," Gurira told Digital Spy of the show, which starts its third season this sunday on AMC. "I'd heard of it, but I'd avoided the whole zombie aspect. I was like. 'No, no, no, I don't want to watch zombies!'" Of course, that wasn't going to stand in the way of getting a job, and the actress, previously known best for smaller roles like her stint on Treme, not only read all of the comics but sat down with previous episodes before she went in to see the producers for the first time. "When I got the audition, I was like, 'Okay, I've got to watch zombies', but I really got sucked in, because it's so character-driven and it's so beautifully put together. That's what appeals - it isn't just a zombie show, it's not just a zombie book. It goes beyond that - it goes into that human experience, almost that warzone authenticity and that human experience of, 'Who do you become in a situation that dire?' So the zombies are a threat but it isn't so much about them, it's about who people become in the midst of that. That really drew me in... and then I got over my scaredy-cat-ness!" And now that she's actually got the job? "It's great stuff, I love it. I started to fall in love with how the zombies are put together when I was watching the show and I got over my fear. Meeting Greg Nicotero, the genius behind all of that, I came to the studio before I started shooting in Los Angeles and I was just so thrilled to see how they put them together and to see the massive zombie-making factory - it was so exciting. "I kind of love it all now. Sometimes [when you're filming] you're in 100-degree heat and it's a lot, but with the violent aspects of things... I've always been attracted to action stuff. Being able to play an action character who is able to apply herself physically in that way really thrilled me. I'm really enjoying that."